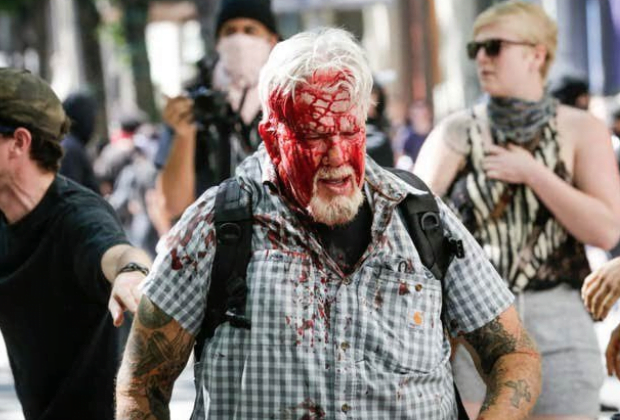 The mayor of Portland is taking serious heat for Antifa’s antics. This includes last weekend’s protest that led to a brutal attack on journalist Andy Ngo.

“He’s a young and bright guy, but he’s completely incapable as mayor, and he’s decided to allow these protests,” said Larson. “The usual line is that, Well, I have to protect everybody’s right to speak.”

“Your right to speak stops when you throw a fist or a brick or a so-called milkshake made up of quick drying concrete which has caustic chemicals in it that can burn your skin,” he explained. “It’s extremely hard to get off, and now these Antifa types have taken to mixing up big, quart size containers of what they call milkshakes that they throw on people like Andy Ngo.”

In an exclusive interview on The Todd Starnes Show, Ngo told Todd that he is not able to work right now as a result of his injuries. In addition to being pelted with items, Ngo was punched and kicked while covering an Antifa protest with nothing but a camera.

“If you’re on the left and you oppose President Trump, you can do whatever you like,” said Larson. “If you’re a right-thinking conservative and want to document what people say and do, you can be attacked with impunity.”

In addition to private citizens, Larson said Antifa is known to attack members of law enforcement.

“They will throw bricks, light highway flares, set police vehicles on fire and break windows,” Larson continued. “They generally have rampaged through downtown Portland from time to time for literally years, and this is the group that three years ago, in 2016, federal authorities identified as domestic terrorists.”

Harmeet Dhillon, the attorney for Andy Ngo, wants the U.S. Department of Justice to investigate the attack on him as a civil rights violation. Dhillon told The Todd Starnes Show that police officers did nothing, due in part to a command and control structure from a “weak coward” of a mayor who told them to do nothing.

Dhillon is not alone in that opinion.

“Their marching orders, their rules of engagement, are to simply stand down and let them cause trouble,” said Larson.

“I also feel bad for the conservative freedom lovers in Portland,” Starnes continued. “I suspect there are not many but I feel bad for those folks because clearly they have been overrun by a bunch of anarchists.”

This is the kind of attack on American tradition that I write about in my upcoming book, “Culture Jihad: How to Stop The Left From Killing a Nation.” Click here to pre-order.