Libs Freak Out After Professor Calls Republican a “Nice Guy” 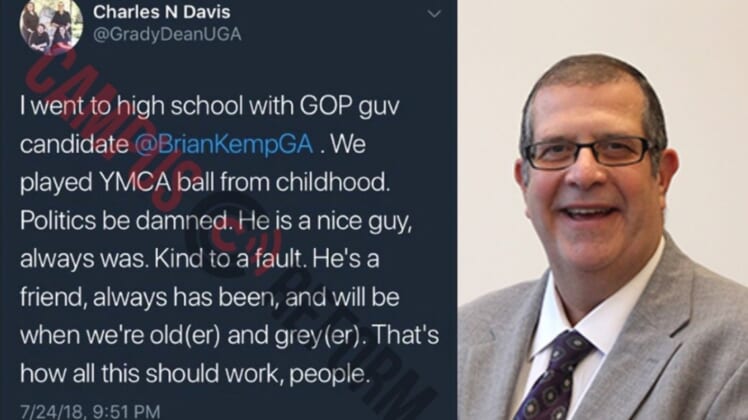 There is a disturbing trend in American culture and politics — the public shaming of anyone who supports President Trump or a conservative lawmaker.

They use all sorts of tactics – from violence to online badgering and bullying. The end result is to silence those opposed to the Left.

The latest victim of this political mob is Charles Davis – the dean of the journalism school at the University of Georgia. It’s a story first reported by Campus Reform.

Professor Davis is a friend of Brian Kemp – the Republican nominee for governor. He wrote a tweet calling Mr. Kemp – politics aside – a nice guy and childhood friend.

“I went to high school with GOP guv candidate @BrianKempGA,” Davis wrote in the now-deleted tweet. “We played YMCA ball from childhood. Politics be damned. He is a nice guy, always was. Kind to a fault. He’s a friend, always has been, and will be when we’re old(er) and grey(er). That’s how all this should work, people.”

Not too long afterwards – a Twitter mob descended upon the professor – armed with hashtags and 280 characters.

He was called all sorts of names — accused of being a racist. The vitriol became so severe the professor deleted the tweet and issued an apology.

I’d like to apologize to anyone offended by my tweet shout out to Brian Kemp. It was ill-timed and poorly written. I’ve read and learned so much from you all and will endeavor to be more thoughful.

This is simply unacceptable. We cannot and we must not capitulate to the bullies.

And let me say this — those of you who support President Trump having nothing to be ashamed of. You have nothing to apologize for.

Be loud and proud, Deplorables!