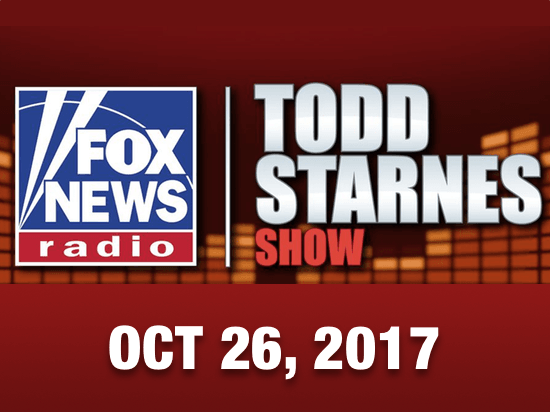 2:30pm- Guest: Eric Metaxas , #1 New York Times bestselling author, nationally syndicated radio host, and respected thought leader. Eric’s latest subject is MARTIN LUTHER: The Man Who Rediscovered God and Changed the World. Just in time for the 500th anniversary of The Ninety-Five Theses, this searing biography tells the story of the man whose faith and courage sparked a revolution—and gave birth to the ideals that lie at the heart of all modern life.

1:05pm- Not Adding Up! Mandalay Bay security guard Jesus Campos mysteriously left the country just days after the Las Vegas massacre, a report says. Customs and Border Patrol documents obtained by Fox News show that the 25-year-old entered the United States from Mexico at the San Ysidro border crossing in California — one week after the mass shooting. It’s unclear how long Campos was out of the country. The documents only show that he re-entered the US. The young man reportedly crossed the border at the same location in January. While Campos was driving his own vehicle with Nevada plates during that trip, sources told Fox he took a rental car this time around — which was registered in California. The new information raises even more questions about Stephen Paddock’s Oct. 1 massacre — such as why authorities would allow Campos to leave the country in the middle of their investigation or how the security guard managed to make it down to Mexico with a gunshot wound to his leg.

1:30pm- Guest: Ben Stein, is a writer, actor, economist, and lawyer. He writes “Ben Stein’s Diary” for every issue of The American Spectator and author of the new book “The Capitalist Code: It Can Save Your Life and Make You Very Rich”

12:05pm- All About Dossier! The Clinton campaign and Democratic National Committee paid more than $9 million to a law firm that, in turn, retained the political consultants who commissioned the now-infamous Trump dossier. But nobody at the top is copping to knowing a thing about it. Hillary Clinton is conspicuously silent on the new revelations, while Clinton World gives mixed messages about her knowledge. Her top campaign spokesman says “she may have known,” while an anonymous source is telling reporters she only learned about the dossier after BuzzFeed News published it early this year. ‘[Clinton] may have known, but the degree of exactly what she knew is beyond my knowledge.’ – Ex-Clinton campaign spokesman Brian Fallon “I don’t know what she knew or did not know,” House Oversight Committee Chairman Trey Gowdy, R-S.C., told “Fox & Friends” on Thursday, adding: “I would find it pretty interesting if her campaign was making decisions at that level that she didn’t know about.” Rep. Peter King, R-N.Y., said he can’t believe Clinton or a top official like then-campaign chairman John Podesta was not aware. Question: Do you now believe this is a major scandal for the Democrats NOT President Trump? 888-788-9910

12:30pm– Dipping Low? President Donald Trump’s approval rating reached the lowest mark it has been in any Fox News poll, 38 percent. In Fox News’ latest poll released Wednesday, the percentage of voters who approve of the president dropped 4 percentage points from September and a full 10 points since the poll’s first post-inaugural results in February, while the number of those who disapprove — 57 percent — rose to a new high under his administration. The findings highlight a continued erosion of national support for the president, who received low mark across several major policy areas. Approval for President Trump remained high, however, among Republican voters, who overwhelmingly favored his performance at 83 percent. Plus: When asked their feelings about the direction of the country today, 57 percent of respondents in the Fox News poll said they were “not so hopeful,” while only 41 percent said they were “hopeful.” Question: How do you feel about the current state of affairs?