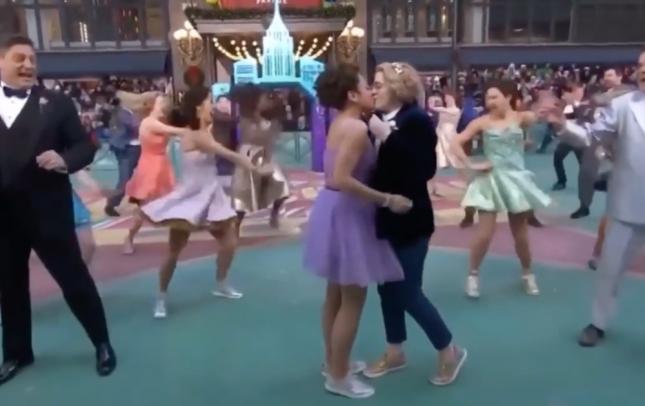 There was a time when the Macy’s Thanksgiving Day Parade was a family-friendly affair filled with marching bands, super-sized cartoon balloons and Santa Claus.

But these days the department store chain is more interested in using its nationally-televised parade to promote a specific agenda.

This year, Macy’s made “history” for broadcasting the family-friendly parade’s first-ever lesbian kiss. The girl-on-girl smooch happened during a musical performance celebrating the new Broadway musical “The Prom.”

Hundreds of parents reached out to me — and they were beyond furious.

“I was so infuriated this morning as I watched the parade with my four young children and had my kids question why two girls were kissing. I have always enjoyed the parade but immediately was done watching it today after this,” one mom wrote to me.

A dad wrote, “It’s a sad day when I have to tell my children they aren’t allowed to watch the parade this year.”

In 2016 Macy’s included a performance featuring the cast from the Broadway musical “Kinky Boots.”

“You have to start a dialogue,” the musical’s co-creator Harvey Fierstein told Page Six. “And you can’t have a dialogue unless someone says something first. It takes actual work to open up [people’s] minds.”

“I’m so proud that the cast of Kinky Boots brought their message of tolerance and acceptance to America’s parade,” he said.

Two girls. Just kissed. On live TV. On the Macy’s Thanksgiving Day Parade. I suddenly cried. Lovely. Thanks given to @ThePromMusical. (& Macy’s/NBC.) & lesbians everywhere. & turkeys. For their sacrifice. But esp. @ThePromMusical.

Wait, that performance of The Prom — was that the first time a kiss between two women aired during the #MacysParade?!?!

You know – I’m thankful for #20gayteen. I finally live in a world where national TV isn’t ashamed to show this on a wildly broadcasted event. #representationmatters pic.twitter.com/t6oI2a8nzN

The Mainstream Media also heralded Macy’s decision to use the family-friendly parade to promote the same-sex kiss:

Rod Dreher, writing for The American Conservative, accused Macy’s of rubbing the “noses of the culture war’s losers in their defeat.

“Now, Macy’s has sexualized and lesbianized Thanksgiving in its iconic kids’ parade,” he wrote.

“We weren’t allowed to enjoy this moment before the incessant homosexual agenda was thrust into America’s face,” the website wrote.

Who knows what sort of ground Macy’s will break in next year’s Thanksgiving Day Parade – perhaps a salute to gender fluidity or polyamorous relationships? Or maybe they’ll just throw caution to the wind and throw an old-fashioned 1960s love fest right in the middle of 34th Street.

Macy’s and NBC have every right to include lesbian kisses and drag queens in the annual Thanksgiving Day Parade. They have the right to advance whatever political or cultural agenda they desire to advance.

That being said, parents with young children might want to pre-tape next year’s parade — to avoid having to answer uncomfortable questions over the giblet gravy.