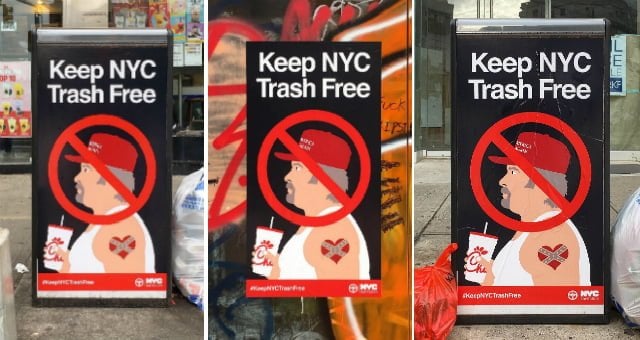 In his newest installation, Tseng portrays one Trump supporter as an overweight white man wearing a “Make America Great Again” ball cap while drinking from a Chick-fil-A cup. The man also sports a Confederate flag tattoo on his arm.

The other image features a woman clinging to a Bible while wearing a “Make America Great Again” ball cap.

Tseng defended the stereotypical images of white Trump supporters in an interview with Brooklyn Street Art.

“I wouldn’t say its meant to represent all caucasians but certainly they are meant to portray a certain demographic,” he said. “In this case a segment of white people that I personally believe the posters accurately reflect. The statistics are there that a lot of Trump supporters who wear the MAGA hats come from red states, from the south, and are Christian Evangelicals. Those are the concepts that I included on these posters. I didn’t make that up. I’m just reflecting something that is a quantifiable fact.”

The interview is worth the read at Brooklyn Street Art. It really does illustrate how much the Left despises Trump supporters.

“I think that the majority of New Yorkers would probably agree with that just based on the statistics of liberals versus conservatives in New York. So it’s personal expression,” he said.

The New York City Department of Sanitation told PIX 11 that the posters were not created or authorized by their agency.

“These posters were not created or issued by the Department of Sanitation, and we do not condone unlawful defacement of City litter baskets or public property. We are looking into this matter,” a spokesperson said.

It’s a free country and Mr. Tseng has every right to express himself. He does not, however, have the right to vandalize public property.

I sincerely doubt his so-called art installation will be criticized by the Mainstream Media or Democrats. But imagine the outcry and public scorn if Mr. Tseng had mocked CNN or Muslims instead of Fox News and Christians.

And for the record, people who cling to their Bibles and eat at Chick-fil-A and support their president are not white trash — they are American patriots.