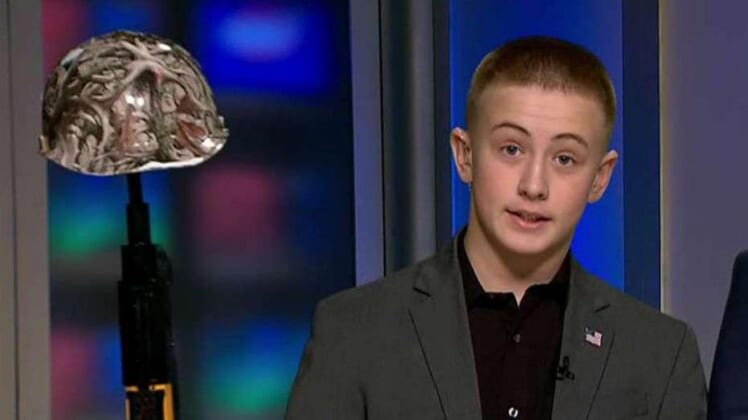 A 13-year-old Ohio middle schooler now has a three day suspension on his permanent record. His crime? Making a battlefield cross replica for a school history project.

Tyler Carlin, a student at Celina Middle School in Celina, Ohio only wanted to honor the nation’s fallen soldiers, but was instead handed a three day in school suspension.

The charge was initially for “bringing a look alike weapon to school and creating a disturbance,” his attorney Travis Faber said on The Todd Starnes Show Friday. But that was changed to “insubordination.”

“Frankly, I don’t know what that means and I went to law school,” Faber told Fox Nation’s Todd Starnes. “That could mean any number of things and I don’t really see how it applies to this situation.”

The battlefield cross is a military memorial that usually places the fallen soldier’s rifle in his boots with his helmet hung over it. Carlin, with permission from his teacher, used a Nerf Dart blaster to recreate the memorial.

Upon arriving to school to present his project, which included a powerpoint presentation, Carlin was stopped by a school official and told to leave his memorial in the school’s office.

Faber said that Carlin was then allowed to give the presentation, but without the visual aid of the memorial.

Following his presentation, Faber said, Carlin’s parents were called to the school and were informed that their son had been suspended for three days for bringing his memorial.

“They [his parents]  weren’t particularly happy about it,” Faber said. “They thought what their son was doing was something that frankly would honor fallen soldiers and honor the memories of some of the people that they knew and that Tyler had grown up with.”

Carlin’s attorney said that the county is overwhelmingly conservative, with President Trump carrying 83 percent of the vote in 2016.

“This isn’t some big city where everybody gets twitchy about stuff like this. This is good conservative Ohio,” he said.

Faber said he had a 22 minute meeting with the school superintendent, and was told that the school would not be changing its position.

Not wanting to file a lawsuit, Faber said that the school has a list of what the Carlins would like, namely that Tyler’s suspension be removed from his record, and that he be issued an apology, and the official who handled the situation be required to take child interaction training.

“The last thing we’ve asked for is that the school helped facilitate putting up a fallen soldiers monument a battle cross somewhere on school grounds so that so that children can see this,” Faber said.

Faber expressed hope that the situation would be resolved amicably, and told Starnes that his firm was willing to waive attorney fees the school would be required to pay as a gesture of goodwill if the issue could be resolved promptly and amicably.

“I don’t think we’re asking for too much,” he said.