FRANK CORDER: People of Faith who Seek to Follow Christ are More Similar in Principle with Republican Policies Than Democrat 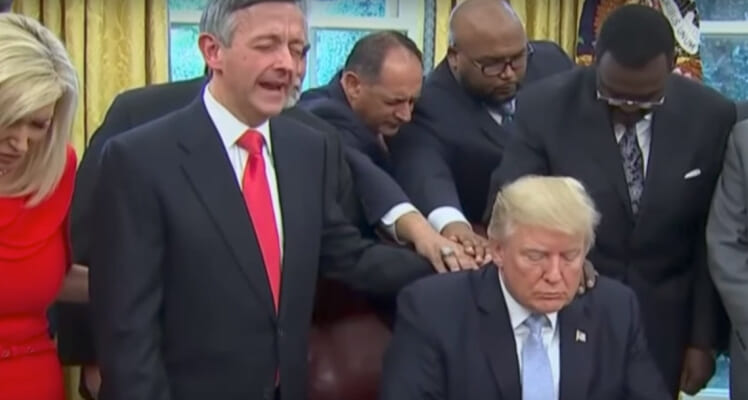 I hesitate to write this as I do not place my faith in man or the systems of man but rather seek to firmly plant my faith in God. However, as I look around and see professed Christians’ leanings, my heart is heavy and burdened.

Being from the South, it’s been said that there are two things one should avoid amongst polite company – politics and religion.  That could not be further from the truth, especially in the times in which we live.

As a born again believer in the life, death and resurrection of Christ whose soul has been covered by the blood of Jesus and who is to be His hands and feet in this world, the faith and values of a Christian should be employed in every aspect of their daily life.

This means that Christians should not only be about the Great Commission, taking the Gospel to their corner of the world, but believers should also be actively involved in our American republic, seeking to make a difference within the social and political systems in which God has strategically placed them, whether that be running for office, serving, or merely voting.

EDITOR’S NOTE: Social media is cracking down on Conservative content. Many of you have complained that you never see our content in your news feeds. There’s only one way to fight back — and that’s by subscribing to the Todd Starnes Show FREE weekly newsletter. Click here.

Just as Christians should be guided by their faith in where they go to church, who they elect as their pastor or lay leaders, and what policies or doctrines they support in their church or evangelical mission, being actively engaged in the political discourse of the day is equally as important to having an impact for the Almighty in this world.

It’s been my experience that when a “Christian” says they don’t want to be involved in politics or questions the believer’s role in political parties they often do so to hide or justify within themselves (or for the benefit of others in a group with which they affiliate) more liberal social or political ideologies that run contrary to the values condoned by their faith.

This is not to say that one political party has the market cornered on the Christian faith anymore than does any one church or denomination.  Any organization guided by man in this world has its flaws and should be tested and tried against the teachings of God-inspired scripture, and all will ultimately be found wanting as all rely on men and women of diverse thought and backgrounds that bring with them habits, thoughts, and perspectives that (just like you and I) aren’t always pure and holy.

Yet, a Christian aligns himself or herself with a certain church largely based on their interpretation of scripture and their view of what being Christ-like means.     Some may find that in following the teachings of a particular pastor or gravitate to a style of worship or music. Others may find that in a church doctrine or creed, or even in the traditions that separate themselves from the world or other denominations.

Honestly, at times, the reasons a Christian chooses to be a part of a church or denomination are not always merely based in their beliefs.  Feelings of being included with friends of like mind plays into it, as does location, convenience, upbringing and other factors not always based in scripture.

To be a part of church organizations a Christian often must overlook certain denominational views that may not fully sit well in their own beliefs.  One may not believe in infant baptism but still find solace in their local Methodist church. Another may not think having a glass of wine with dinner is a big deal but remain on the Sunday School roll in a Southern Baptist church.  A Catholic may not care for their local priest’s delivery of the homily or how stern he may seem in conversation, yet the member still attends mass each Sunday.

The same is true for being a Christian engaged in politics and choosing which political party you support.  After all, voters are not as much choosing a particular candidate, especially on the national stage, as they are choosing which set of values or party principles they will align with when they cast their ballots.

Understanding this, there is only one major political party today where a Christian can even come close to finding likeminded beliefs, that being the Republican Party.  Associating with the Democratic Party as it is structured today or backing their candidates and their platform at all levels of government requires the Christian to not only ignore basic principles in scripture but accept a secular morality based in humanism and individualism which has lead to an emphasis on self-gratification and harmful and oppressive world views with roots in Marxism, socialism and communism – all political systems that do not value the Christian faith.

Despite what you may hear today from the left, America’s Founding Fathers believed faith was essential to sustaining our republic.

John Adams: “We have no government armed with power capable of contending with human passions unbridled by morality and religion. Our Constitution was made only for a moral and religious People. It is wholly inadequate to the government of any other.”

Thomas Jefferson: “And can the liberties of a nation be thought secure when we have removed their only firm basis, a conviction in the minds of the people that these liberties are of the gift of God? That they are not to be violated but with His wrath? Indeed I tremble for my country when I reflect that God is just; that his justice cannot sleep forever.”

Patrick Henry: “Righteousness alone can exalt [America] as a nation. Reader! Whoever thou art, remember this; and in thy sphere practice virtue thyself, and encourage it in others… [T]he great pillars of all government and of social life: I mean virtue, morality, and religion. This is the armor, my friend, and this alone, that renders us invincible.”

For the Christian, valuing life is Biblical. Desiring an ordered life and employing self restraint is Biblical. Being a person who stands on their faith as a foundational part of who they are and what they believe is Biblical. Respecting the authority of those who lead us, praying for them, and working alongside them is Biblical. Rejecting lifestyles that are in direct conflict with scripture is Biblical.

Only one major political party in America today doesn’t hide the name of God.

Only one party values members who proudly call themselves born again believers who do not support unbiblical lifestyles and who openly practice their Christian faith.

Only one party aligns itself with the foundational belief of life from conception.

Only one party values the free exercise of religion safe from an oppressive government, a principle this nation was founded on.

Only one party shuns lawlessness, murders, riots and destruction of private property.

Only one party seeks to uphold the traditional nuclear family of a father, mother and children.

I could go on, outlining differences and attaching scriptural references to support my claims, yet if we are intellectually honest with each other we both know this to be true.

No, the Republican Party isn’t perfect, but neither is our church or denomination.  Republican officials aren’t perfect either, just as none of us are who profess to be a follower of Christ.  And no, you won’t agree with every policy in the GOP platform or think every Republican candidate or elected official shares your faith or is a good person in the same way we may question phrases in the church covenant and disagree with a point in the preacher’s sermon or be suspect of the pastor, Sunday School teacher or the guy down the pew’s opinions or lifestyles outside the church.

But there’s no debating that people of faith who seek to follow Christ are more similar in principle with Republican policies and a majority of Republican voters and elected officials when considering those values outlined in scripture than with the Democrats of today.

The Christian flirtation with the left has emboldened those who seek to undermine America.  They have demanded approval and acceptance of policies and lifestyles that are wholly at odds with scripture, and many “loving” Christians have traded in God’s commandments for a worldly point of view to get along or to not appear to approve of a single politician.

Christians must actively engage in supporting policies that more closely align with their beliefs and seek to once again instill a respect for faith, family and flag if these United States are to persevere for generations to come under a Constitution established for a moral and religious people, as Adams said.

Christians – let’s talk politics and religion openly, prayerfully considering the policies  and values of our nation and our churches.  Not doing so only creates a generation who value themselves over others, who reject the rule of law and shun God, and who distort scripture and America’s history to fit their own narrative and justify their harmful and misguided ways.

We must stand with those who more closely share the principles of our faith, whether that be Republicans of today or another party in the future should they fall prey to leftists’ worldviews.

We must be ever ready to employ ourselves in the propagation and defense of our values whether in our own homes, our communities, our churches, and yes, in the voting booths so America can remain one nation under God.

Frank Corder is an ordained minister, husband and father of two. He is the Managing Editor for Y’all Politics, Mississippi’s leading political news outlet. He is a former twice elected City Councilman and Acting City Manager, and has advised campaigns at every level.