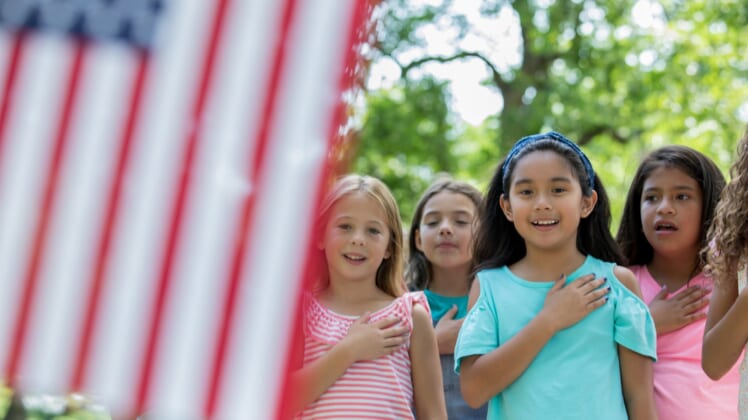 Dozens of citizens in St. Louis Park, Minnesota chanted, “USA, USA” and recited the Pledge of Allegiance in defiance of city council leaders.

The city council voted to stop reciting the pledge before meetings because it might offend newcomers to the community.

“We concluded that in order to create a more welcoming environment to a diverse community we’re going to forgo saying the Pledge of Allegiance before every meeting,” councilman Tim Brausen said ahead of the vote.

Ironically St. Louis Park is in the state’s third congressional district — represented by Rep. Ilhan Omar. Omar recently made headlines by telling teenagers that she was disappointed in America — called her adopted nation “unjust.”

It looks like the apple didn’t fall far from the tree in St. Louis Park.

“I want to make sure that we are welcoming to everyone in our community, and so I just felt that was an unnecessary component to include every single week in our work,” councilwoman Anne Mavity told the Star-Tribune newspaper.

“The council’s meeting to reconsider the controversial change was held on Monday, as nearly 100 citizens waved American flags and chanted ‘USA!’ in a bid to convince the council to reverse course before the change goes into effect next week,” Fox News reported.

My upcoming book, “Culture Jihad” explores the left’s attacks on our beloved American traditions — including the war on the Pledge of Allegiance and National Anthem. Click here to pre-order a copy.

As for those who might take offense at the recitation of the Pledge of Allegiance — I recommend booking a one-way ticket to whatever third-world hellhole that tickles your fancy.