Round Up! GOP Candidate Drives “Deportation Bus” Across Georgia 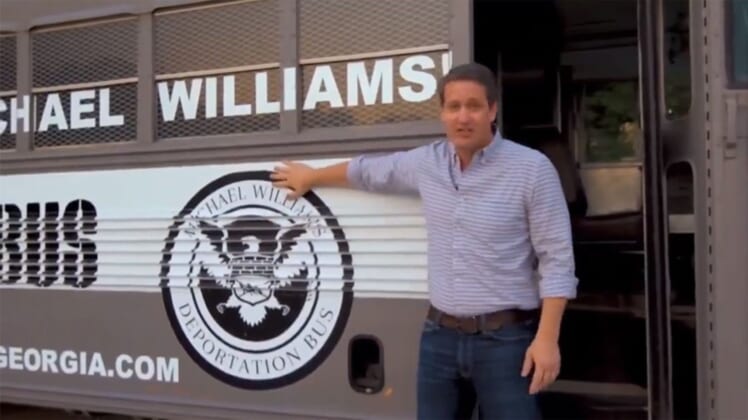 No one will ever accuse State Sen. Michael Williams of traveling around Georgia on a “pansy” political bus tour.

YouTube briefly blocked the political ad because they considered it “hate speech.”

CLICK HERE TO LISTEN TO TODD’S INTERVIEW WITH SEN. WILLIAMS

He’s vowing to “fill this bus with illegals and send them back to where they came from.”

Williams joined the Todd Starnes Radio Show Wednesday on his way to a sanctuary city in Clarkston, Georgia.

Williams was the first Republican leader in Georgia to endorse President Trump — back in 2015.

“He is trying to save our country and illegal immigration is one of those things we have to hit head on,” Williams said.

And his “Deportation Bus Tour” commercial is the best political ad of the midterm election season.

The bus is plastered with signs like, “Follow me to Mexico” and “Murderers, rapists, kidnappers, child molestors (sic), and other criminals on board.”

“We need Republicans in Congress and governor’s offices who are willing to stand up and fight for our citizens and stop caving in to the liberal media and progressives,” he said.

Vote Republican Michael Williams May 22nd -the only candidate for governor that endorsed Donald Trump – the others wouldn’t endorse him against Hillary! pic.twitter.com/fEATVD8GM4