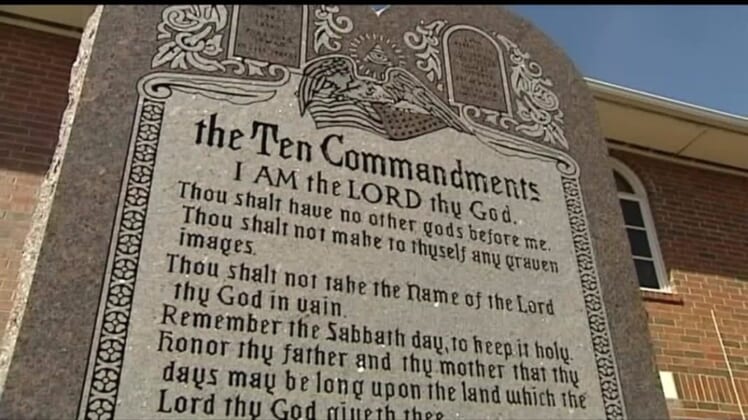 The Satanic Temple is threatening to sue the state of Arkansas over the installation of a Ten Commandments monument on the grounds of the state capitol.

The monument was unveiled last week by state Sen. Jason Rapert and the American History and Heritage Foundation.

“Rapert is obviously a mindless tool for theocratic interests originating outside of Arkansas, as his bill utilized the exact language used in failed efforts to maintain a Ten Commandments monument at the capitol in Oklahoma — legal language that the simple senator was unable to comprehend,” Satanic Temple co-founder Lucien Greaves said.

Rapert fired back against the Satanists during an appearance Thursday on the Todd Starnes Radio Show.

“They literally have a hatred for the Judeo-Christian values in our country,” he said. “They are warring against the heritage and history of America.’

PODCAST: Todd’s podcast is one of the fastest-growing Conservative podcasts in America! Click here for a FREE subscription!

In 2015 Rapert sponsored a bill to erect the Ten Commandments monument on the grounds of the capitol building.

In 2017 a monument was erected and subsequently destroyed by a man who rammed the display with his car. The accused driver was declared unfit to stand trial.

The replacement monument was provided thanks to more than 800 donors including executives from Pure Flix Entertainment.

First Liberty Institute, one of the nation’s most prominent religious liberty law firms, said the state of Arkansas is on firm legal ground.

“The Supreme Court of the United States and the United States Court of Appeals of the Eighth Circuit, the federal circuit court in which Arkansas sits, both ruled within the past 15 years that passive displays of the Ten Commandments are constitutional,” First Liberty general counsel Hiram Sasser said.

First Liberty Institute is authorized by state law in Arkansas to assist the Attorney General of Arkansas in its defense of the monument.

“Attorney General Rutledge and her team are fantastic lawyers and they will serve Arkansas well as the state joins other states that already have a Ten Commandments monument on their Capitol grounds,” Sasser added.

In other words, should the Satanists attempt to target the Ten Commandments, they won’t have a chance in hell.