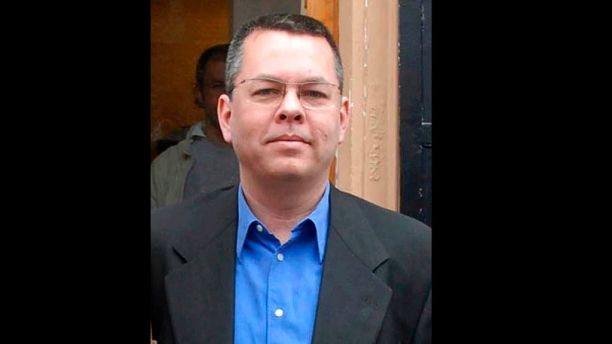 The well documented persecution of Christians in the Middle East is making its way westward, with a member of NATO detaining a Christian pastor on trumped-up charges born out of religious bigotry.

Andrew Brunson, an Evangelical minister who was working in Turkey, has spent the last two years in a prison cell on charges of being a member of an armed terrorist organization and assisting the Kurdish Worker’s Party members by making them Christians.

Pastor Brunson’s story has received renewed attention following a tweet by President Donald Trump, where he called on his Turkish counterpart, Recep Tayyip Erdogan to “do something to free this wonderful Christian husband and father.”

“He has done nothing wrong, and his family needs him,” the president said in his tweet.

A total disgrace that Turkey will not release a respected U.S. Pastor, Andrew Brunson, from prison. He has been held hostage far too long. @RT_Erdogan should do something to free this wonderful Christian husband & father. He has done nothing wrong, and his family needs him!

Tony Perkins, the president of the Family Research Council, joined the Todd Starnes Show on Thursday to discuss Brunson’s predicament, and what the Trump administration was doing to resolve the situation.

“This is really a farce that’s taking place,” Perkins said. “He’s been held for two years, they’ve charged him with trying to undermine the government association with terrorist organizations.”

Perkins noted that Turkey, a current member of NATO, a major military alliance of western nations, includes in their constitution protections for religious liberty, but “that’s the farthest thing from practice that we see in Turkey, and that should serve as a warning to the rest of the international community about Turkey.”

The FRC president told the listeners of the Todd Starnes Show that Brunson is only allowed to contact his wife about once a month, but per Perkins’ conversations with the pastor’s daughter, “he’s grown strong in his faith.”

“He’s afraid he’ll be forgotten by the United States government, and quite frankly under the previous administration, that was a very probable outcome,” Perkins said.

Perkins said that he knew that President Trump had discussed the issue with President Erdogan, but part of the reason “Turkey is kind of protracting this judicial farce… is we have a respect for the rule of law.”

This administration has put a high priority in defending religious freedom,” Perkins said. “I have a much greater sense of comfort that we will not leave americans behind, whether they’re a minister ministering in a foreign country, or a member of our military serving on foreign soil.”

Perkins said that he believes that Turkey could be on its way out of NATO as “increasingly the values that Turkey embraces, the lack of freedom, makes them incompatible with the missions of NATO.”