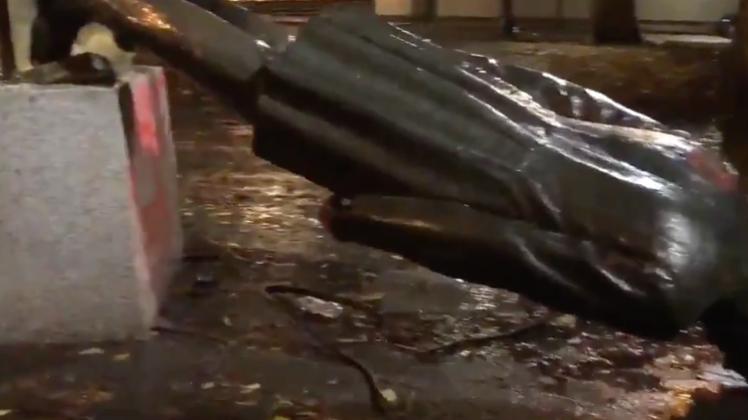 The following is a transcript of Todd’s morning commentary.

They called it a Day of Rage in Portland, Oregon. Hundreds of Antifa rioters taking to the streets – causing all sorts of mayhem.

The mob angry about Columbus Day – declaring war on the white colonizers of America. This is the kind of violence I warned about in my book, “Culture Jihad: How to Stop the Left From Killing A Nation.” Click here to read.

Put these animals in jail, now. The Radical Left only knows how to take advantage of very dumb “leadership” fools. This is Biden! Law & Order! https://t.co/w0yH3SqnrB

They topped two statues – one of Abraham Lincoln – the other of Theodore Roosevelt.

One person could be heard saying,  “F— all you colonizers. Every one of you that’s against Black Lives Matter can f— the f— off.”

They also pillaged and plundered the offices of the Oregon Historical Society.

Those at the historical society building reportedly put up a banner that read,  “Stop honoring racist colonizer murderers.”

The group numbered about 200 – most dressed head to toe in black and many wore body armor, the Oregonian reported.

The Abraham Lincoln statue in Portland was toppled tonight by the “indigenous” faction of antifa who organized a “day of rage.” #PortlandRiots pic.twitter.com/HJ6ul7p4Hi

President Trump denounced the violence – calling those responsible animals and said they belonged in jail.

He also called out the Democrat leaders of Portland – saying they are turning a blind eye as militant thugs take over an American City.

Be sure to remember that on Election Day.

Be sure to listen to my national radio show live noon to three eastern. You can listen online at TODDSTARNES.COM and that’s where you can also download a free copy of my daily podcast.