TV Reporter Says She Obeyed God Rather Than Government 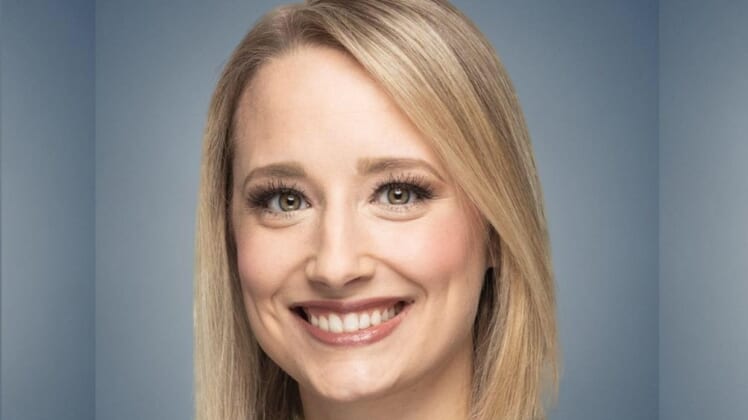 Kim St. Onge, a longtime broadcaster at KMOV in St. Louis, Missouri, was let go for refusing to get the mandatory jab.

Kim St. Onge, a longtime broadcaster in St. Louis, Missouri, told the Todd Starnes Show Wednesday she chose her faith over getting the mandatory jab at work.

St. Onge was let go after 10 years on-air at KMOV News. Her parent company, Meredith, required vaccination, but when she applied for a religious exemption, she was met twice with burdensome standards, including wearing an N-95 mask at all times and attending all on-site meetings in a separate room.

“I came back to my union representative and said, ‘Nope, I do not agree with all of these.’ I thought it was discriminatory and quite frankly, ridiculous what they were wanting me to do,” St. Onge said.

She said she turned down a non-disclosure agreement worth several thousand dollars because she wanted to speak out and encourage others to do the same as part of a movement against vaccine mandates.

But above all, it was her faith that compelled her to make the bold decision.

“I don’t answer to anybody but God at the end of it,” St. Onge concluded., “And so that’s who I’m going to make sure that I’m following.”

“On our radio program, we’re a conservative talk radio program,” Starnes added. “We don’t tell people what to do. That’s between them and their doctor and God. That is not my decision to make for people. And we are heading into a very dangerous place in this country when we’re giving up our civil liberties. And I’m afraid those journalists and especially the owners, are going to come to regret the day they did this because one day they will shut down the journalist and they will use the same arguments to do that.”

LISTEN TO THE FULL INTERVIEW WITH KIM ST. ONGE BELOW ON THE TODDCAST PODCAST:

Below is a rushed transcript of Todd’s interview with Kim St. Onge on the Todd Starnes Show Wednesday:

STARNES: [01:37:47] Interesting story out of Missouri, just upriver from where we broadcast in Memphis, Tennessee, a veteran broadcaster is out of a job fired because she refused to comply with the China virus vaccine mandate. A beloved member of the community there in St. Louis, the television station KMOV. And I have to tell you, folks, I’ve known a lot of people in the industry who have lost their jobs as a result of this of this vaccine mandate, especially a lot of folks who work for Cumulus Radio. Well, I want to go to the Patriot mobile newsmaker line. We are delighted to have with us Kim St. Onge, who is the broadcaster who was fired ending a nearly 10-year career in TV news. Kim. Good to have you with us today. [01:38:43][56.1]

ONGE: [01:39:00] They initially came out. This is Meredith that owned the TV station. I worked for KMOV and they let us know that we would either have to have the first dose of the vaccine or, of course, that one shot vaccine by August 20th. And they said that if we had applied for either a religious or a medical exemption that we would have to use our own vacation days while they were deciding whether or not to grant that. So I went the religious exemption route and they forced me to take vacation days at that following Monday and Tuesday. And they were coming back with things like Meredith was saying, You know, we’re understanding that the reason you’re seeking this, this religious exemption is because your faith prevents you from any medical intervention. And so they wanted me to sign a document that said over the last year, I’ve not had anything and they included alcohol, medicine or any other vaccinations over the last year. I quickly responded and said, That is not at all my faith as a Christian does not prevent me from doing that, and I reiterated my reason for wanting the religious exemption. Came back again, and were more or less wanting more. It was, you know, wanting more justification for why I was wanting this. So that was when I went to my church and got a letter from a pastor there. And within ten minutes of submitting that letter from a pastor, my church, they granted the religious exemption. And that was when they sent this list of policies that they wanted me to adhere to. And it took me one day. I said, Look, I need one more day to think about this. I came back to my union representative and said, ‘Nope, I do not agree with all of these.’ I thought it was discriminatory and quite frankly, ridiculous what they were wanting me to do. [01:40:40][100.6]

STARNES: [01:40:42] You know what I find interesting about your story and fascinating, Kim, is that you were offered a nondisclosure agreement worth several thousand dollars. And you said, No, I’m not going to do that. Why not just take the money and be quiet? [01:40:58][16.3]

ONGE: [01:41:00] I think for anybody essentially listening, of course, there’s a temptation to want to take it, but this issue is too big right now. This is not about pro-vaxx, anti-, this isn’t about that. This is about freedom. This is about anti-mandates, government mandates that are being forced on people and making them choose between careers they’ve had. I know some people have reached out. They’ve had careers for 30-plus years and they’re having to make a decision if they want to be able to pay for the food on their family’s dinner table or give in to this. And so to me that that money that they were offering me, while it would have been amazing, especially considering I’m getting married in April. To me, it wasn’t worth it. My voice being able to stand against this and encourage other people to me was more valuable, so that’s why I turned it down. [01:41:43][42.9]

ONGE: [01:41:55] Oh, absolutely, there were some scriptures that I mean repeatedly was saying in my head over and over and over again every time I would feel anxious, which was a lot. You can imagine the emotions that I was experiencing. That really carried me through. You know, I fear God not, man. And, you know, be strong and courageous. Do not be afraid or discouraged. The Lord your God is with you wherever you go. I mean that, yes, I was still anxious, but that really did bring peace to me to remind myself, like, I don’t answer to people who I don’t answer to anybody but God at the end of it. And so that’s who I’m going to make sure that I’m following. [01:42:28][33.2]

ONGE: [01:42:42] I’ve heard from a few colleagues and I’m not, you know, I’m not surprised that a lot of people have chosen to not comment anything because their jobs sadly is at risk. So I have had people say in some cases, you know what? I’m pro-vaccine. We don’t see eye to eye on this, but I will tell you, I respect you for what you’ve done. Or they’ve said, Look, I don’t even support the mandate. And I really was expecting a lot of backlash. And sure, I’ve gotten that on social media, but I really am surprised how much support I’ve received from all over the country. It’s been incredible. Just all of us able to encourage each other and say, stand strong in this. [01:43:17][35.2]

STARNES: [01:43:19] Absolutely. And you know, again, it’s it is so impressive the decision you made and you know, the courage that you had making that decision because you’re right, there’s a lot riding on this, but you felt like this is what God was calling you to do. And I’m with you, Kim on our radio program. We’re a conservative talk radio program. We don’t tell people what to do. That’s between them and their doctor and God. That is not my decision to make for people. And we are heading into a very dangerous place in this country when we’re giving up our civil liberties. And I’m afraid those journalists and especially the owners, are going to come to regret the day they did this because one day they will shut down the journalist and they will use the same arguments to do that. [01:44:05][46.5]

ONGE: [01:44:07] Yep. Yeah, we’ve seen what happened with Southwest, where now they’re coming back and they’re saying that anyone who is now employed doesn’t have to get it, but any new employees do so. While I still don’t agree with any mandate whatsoever for existing or new employees. It takes a big movement like that. So. So one person might think, well, just me, you know, leaving this job isn’t going to do anything, you know, that’s not enough. But it does. It really can send shockwaves, and I think it takes the one person brave enough to do it. And then it creates this ripple effect. So that’s to me, it’s been a big learning experience to, you know, it does matter that the single person that matters. [01:44:40][33.5]

ONGE: [01:44:49] Well, TBD for now. I have a temporary job and I’m going to kind of wait it out and kind of take a backseat to everything that’s been happening in my life over the last two months and kind of breathe and figure out my next step. So I’m not quite sure yet if I would go back into broadcasting or in what capacity. [01:45:07][18.3]

STARNES: [01:45:09] Well, I’m just going to throw this out there, Kim, you know, in addition to hosting, I own a news talk radio station in Memphis, just right down river. And we don’t require mandatory vaccine policies. You don’t have to show your papers. And you know, if you’re looking for a good journalism gig, you feel free to give me a holler. [01:45:28][18.8]

STARNES: [01:45:41] I love it. Welcome, God bless you. And what a great testimony. And I know it’s such an encouragement to a lot of folks out there that are struggling. They’ve either been through this or they are currently going through it. And, you know, folks just have to stand strong in their faith and know that God is ultimately in control of all of this. [01:45:57][16.0]

STARNES: [01:46:17] All right, Kim St. Onge, ladies and gentlemen, a longtime broadcaster in St. Louis, Missouri KMOV News. She was fired because she refused to comply with those mandatory vaccine policies and very impressive that she is a person of faith. There are not many people like that in broadcast journalism, but that, you know, that ultimately was the decision she made and I say good for her. [01:46:46][28.5]