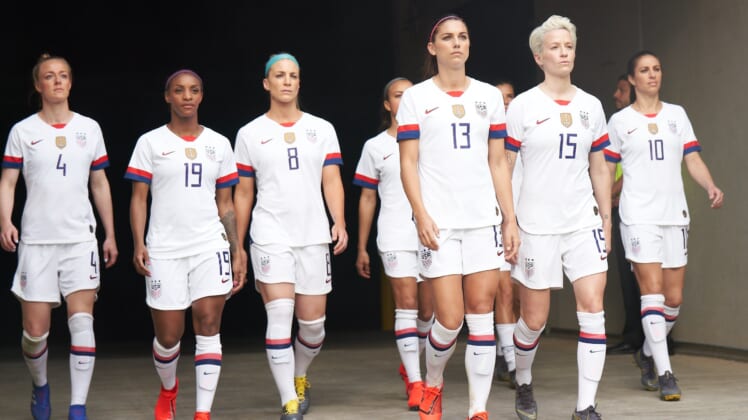 EDITOR’S NOTE: Many of you have complained that you never see our content in your social media news feeds. There’s only one way to fight back — and that’s by subscribing to my FREE weekly newsletter. Click here.

I never understood why Megan Rapinoe agreed to accept a position on the U.S. Women’s National Team. Why would she play for a country that she holds with such contempt?

And even more puzzling, why would U.S. Soccer select a woman who clearly cannot tolerate the nation she’s supposed to be representing?

There’s no doubt that Ms. Rapinoe is a great athlete, but her off-the-field behavior is repugnant, unpatriotic and downright unsportsmanlike.

She told Yahoo Sports that she considered herself to be a “walking protest when it comes to the Trump administration.”

Back in 2016 she took a knee during the National Anthem to show her solidarity with disgraced football player Colin Kaepernick.

When U.S. Soccer issued a statement calling on players to stand for the national anthem, she blasted the decision as “blanketed patriotism” and “cowardly.”

During the World Cup, Ms. Rapinoe stood during the Star-Spangled Banner, but refused to sing along or place her hand over her heart.

Ms. Rapinoe called her one-woman protest against the National Anthem a “F you” to the Trump administration.

“I feel like it’s kind of defiance in and of itself to just be who I am and wear the jersey, and represent it,” she said. “Because I’m as talented as I am, I get to be here, you don’t get to tell me if I can be here or not. So, it’s kind of a good ‘F you’ to any sort of inequality or bad sentiments that the [Trump] administration might have towards people who don’t look exactly like him. Which, God help us if we all looked like him. Scary. Really scary. Ahh, disturbing.”

And when asked in a separate interview if she planned on visiting the White House should they win the championship, she replied with a vulgarity.

President Trump finally responded to Rapinoe’s rantings, after months of watching her take cheap shots at the nation and the flag.

“Megan should never disrespect our Country, the White House, or our Flag, especially since so much has been done for her & the team,” the president tweeted.

Well, that announcement pretty much triggered a good many of the ladies on the team.

Rapinoe doubled down on her boycott and teammates Alex Morgan and Ali Krieger said they planned to follow her lead.

“I refuse to respect a man that warrants no respect,” Krieger told CNN.

Just because you’re suffering from Trump Derangement Syndrome is no reason to be a jerk. Nobody likes a sore loser and nobody likes a bad winner.

And many American soccer fans have grown tired of the boorish, unpatriotic behavior of the women’s soccer team.

The United States women’s soccer team may have won the FIFA World Cup, but I’m afraid they are precariously close to losing America.