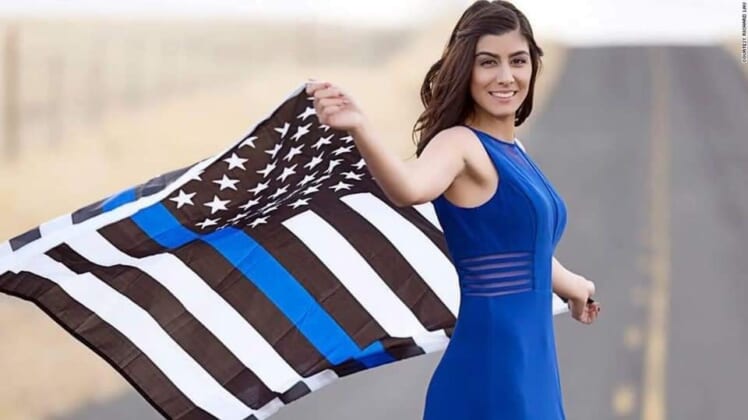 In 2016 Natalie Corona posed for a series of stunning pictures taken by California photographer Rich Laus. The photographs, which she later posted on Facebook, showed the young woman wearing a royal blue gown and holding a Thin Blue Line flag.

“I would like this photograph to serve as my gratitude for all of those law enforcement men and women who have served, who are currently serving, and those who have died in the line of duty protecting our liberties in this great country,” she wrote on her Facebook page.

Tragically, her message was prophetic.

On Jan. 11 Davis police officer Natalie Corona was gunned down while responding to a car crash. She was 22-years-old, described as a rising star in the police department.

And many people across the nation have embraced the photograph of Corona holding the Thin Blue Line flag as a way to honor and memorialize the fallen officer.

However, a group of students at the University of California, Davis contend the photograph is racist and they are demanding that people cease and desist circulating the image.

“The flag is blatantly anti-Black and disrespectful,” the Associated Students, UC-Davis Ethnic and Cultural Affairs Commission wrote on its now-deleted Facebook page.

“We see it necessary to call-out all community members who continue to post and disseminate images of the Blue Lives Matter flag online,” they wrote. “We would like to directly address that this flag represents an attempt by law enforcement to undermine the Black Lives Matter movement.”

The Ethnic and Cultural Affairs Commission also offered to provide help for students “triggered by this event and the circulating images of a flag that has been popularized by the ‘Blue Lives Matter’ crowd.”

“Flashing lights, sirens and increased police presence can be triggering to many Black and Brown people,” they wrote.

The slander and smears perpetrated by the feeble-minded, social justice snowflakes at UC Davis must be addressed.

The Thin Blue Line flag does not stand for racism or bigotry. It stands for the sacrifice that American law enforcement officers make every single day.

Fortunately, there are some students on campus who were bold enough to call out and condemn the organization’s sick and twisted statements.

“I wholeheartedly condemn the Ethnic and Cultural Affairs commission for this disgusting post,” wrote Michael Gofman, the president of the Associated Students, UC-Davis. “It’s easy to sit on the third floor of the Memorial Union where there are at least 100 brave men and women in blue between you and the shooter. It is easy to argue hypotheticals, politics, and ideology when you’re in safety.”

“I am ashamed that some of these same people, protected by the very officers that they are condemning, have the audacity to politicize the loss of a young officer. Her only crime was being a police officer,” Gofman wrote on his Facebook page.

The university’s social media pages have been inundated with messages of outrage from citizens and law enforcement officers from around the nation.

“You are an intolerant hate group that needs to be disbanded,” one writer posted. “Sad state of affairs when you condemn a police officer who died in the line of duty protecting YOUR community.”

I reached out to the university for an official comment and explanation, but they did not return my messages.

California taxpayers should be repulsed by the notion that their hard-earned money is being used to prop up anti-police bigots like the Ethnic and Cultural Affairs Commission. They should be demanding that the university dismantle this hate group and expel its membership.

And one more thing, if you are triggered by flashing lights or the presence of a police officer, you don’t need a college education – you need professional psychiatric help.