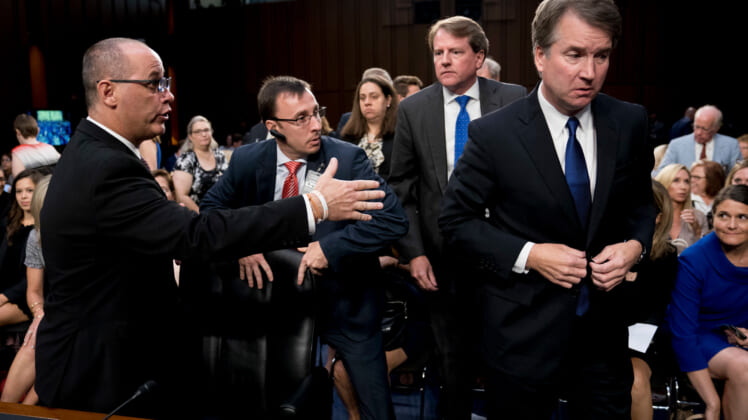 There’s been a lot controversy over a bizarre encounter during the Senate confirmation hearing for Judge Brett Kavanaugh.

Fred Guttenberg, whose daughter was killed in the Parkland mass shooting, approached Judge Kavanaugh during a break in the proceedings. Video of the incident shows Judge Kavanaugh turning away as the man extended his hand.

“Put out my hand to introduce myself as Jamie Guttenberg’s dad,” he later tweeted. “He pulled his hand back, turned his back to me and walked away.”

The Mainstream Media became enraged and accused Judge Kavanaugh of intentionally snubbing the man. They demanded he apologize.

“All he had to do is extend his hand back and say, ‘I’m sorry for your loss, tell me about your daughter.’ That’s it!” Guttenberg told CNN.

The White House rejected Guttenberg’s depiction of what happened — noting that security intervened when “an unidentified individual approached” the judge.

“Before the Judge was able to shake his hand, security had intervened,” Deputy Press Secretary Raj Shah wrote on Twitter.

A source told CNN the security detail acted quickly because “they did not know who the person was.”

And it was a prudent decision by security based on the unhinged behavior of the seething mob that had infiltrated the hearing room. In a matter of seconds, they had to determine whether or not the man posed a threat to Judge Kavanaugh.

The question, based on this tweet published on September 3, is whether Guttenberg had a more sinister reason.

“I will be at Kavanaugh hearings and I hope to play a role in ensuring that this man does not become the next Supreme Court Justice,” Guttenberg wrote.

I will be at Kavanaugh hearings and I hope to play a role in ensuring that this man does not become the next Supreme Court Justice. https://t.co/6oC7OPlyB8

What – exactly – did he mean by that?

A cursory glance of Guttenberg’s Twitter feed reveals a man with far-left leanings. Is it possible he intended to make some sort of a political statement by confronting Judge Kavanaugh?

Then, there was this curious posting from Mother Jones writer Kara Voght: “If you’re watching the Kavanaugh hearings, keep your eyes peeled for @fred_guttenberg. The father of an MSD student killed on 2/14 is a guest of Sen. Feinstein. As he’s done on his other visits to Capitol Hill, he refuses to sit down, his protest against federal inaction on guns.”

“Stop weaponizing Parkland to advance a dangerous political agenda,” he tweeted. “Blaming President Trump and Judge Kavanaugh (of all people) for Parkland is completely illogical. They had nothing to do with it. My daughter is dead because the school board, the police, and the FBI all failed to protect her.”

It was as if this entire incident was some sort of well-planned and well-coordinated operation to smear a good and decent man. That’s shameful, America.