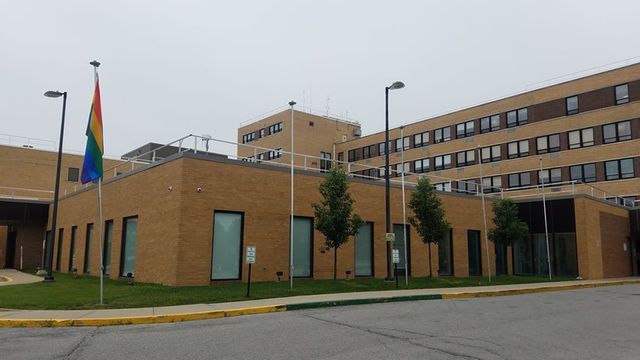 The VA hospital in Fort Wayne, Indiana is making national headlines after they temporarily replaced flags representing the branches of the military with the Gay Pride flag.

The VA acknowledged the controversy, but defended its decision to temporarily remove the Service Flags.

“Due to limitations in the number of flag poles outside our VA, the Service Flags were lowered temporarily,” a statement read. “Rather than take one flag down temporarily, it was determined to lower all the flags so as to be equal.”

Television station WANE reports the Gay Pride flag was only scheduled to fly for a day to “signify that we treat all our veterans equally.”

“We are flying the flag that represents and honors these veterans as a display of solidarity and respect for their service,” the statement read. “We all serve this nation.”

Dozens of readers weighed in on the controversy at DisabledVeterans.org.

“Personally I find it very disrespectful to all Veterans to fly the rainbow flag at any VA facility. It has no place being flown at any Government building or facility,” one reader wrote.

“I never ever think any Military Service Flag should be taken down in order to fly a rainbow flag,” wrote another.

A similar controversy erupted in a small community in Maine when a Gay Pride flag was raised at a veteran’s park. Click here to read that story.

These days it appears Americans are expected to pledge allegiance to a very different flag.