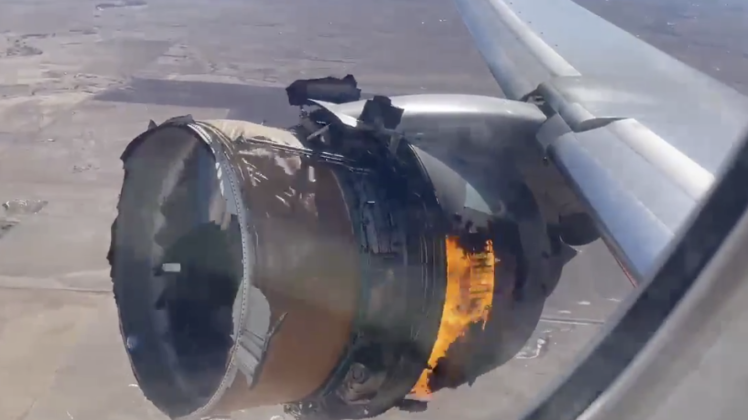 Dramatic video shows large chunks of a jetliner’s engine falling from the sky over a Denver suburb.

United Airlines Flight 328 was bound for Honolulu when it was forced to return to the airport after an engine problem.

Residents in Broomfield reported hearing a loud boom and took photographs of debris that landed in their yards.

Kieran Cain told CNN he was playing with his children at a local elementary school when a plane flew over and they heard a loud boom.

“We saw it go over, we heard the big explosion, we looked up, there was black smoke in the sky,” Cain told CNN.

Video taken on board the jetliner shows a heavily damaged engine engulfed in flames.

There were no injuries on board or on the ground.

Rachel Welte, a spokeswoman for the Broomfield Police Department, said in a news conference that police received calls from residents who said they’d heard a loud explosion.

“Then they just started seeing basically what they thought was a plane falling form the sky. What it was was debris,” Welte said, describing the debris as “possibly some exterior pieces of the plane.”

Police are working to contain the secure the large debris field for the National Transportation Safety Board, which will be in charge of the investigation, according to the FAA.

Our team has compiled videos below:

Wow! Here is video of the United Airlines flight that dropped debris all over the Denver Colorado suburbs. pic.twitter.com/S3Qaq4Sv1j

@broomfieldnews @BroomfieldPD @9NEWS we were at the dog park when we heard the loud boom from the airplane and pieces of the plane started falling pic.twitter.com/9nRg3UgUmV

JUST IN: Denver International Airport officials tell us United Airlines Flight 328 bound for Honolulu returned to the airport after an engine problem. Neighbors heard a loud boom, took these photos of what look like Boeing 777 engine nacelle in their yards. pic.twitter.com/mklpz3VG4F

This photo was taken near 13th and Elmwood. Media stage in Commons Park on North side near dog park. PIO eta is 30 mins. pic.twitter.com/vfXlToB5mE