‘If you don’t like this country, then maybe there’s a different island for you.’ – Rep. Andy Biggs on Rep. Ilhan Omar 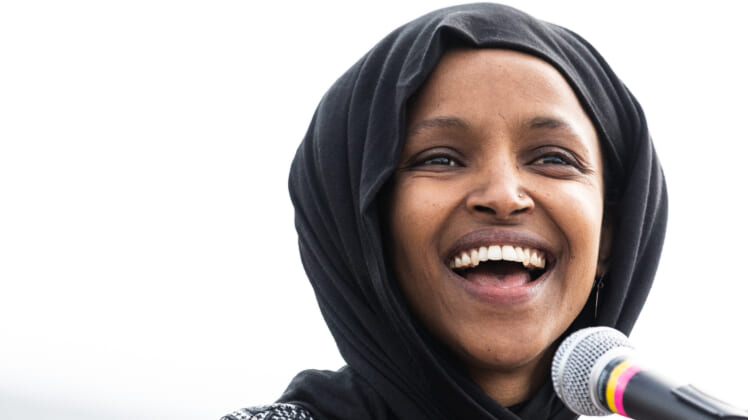 The following is a rush transcript from Todd’s interview with House Freedom Caucus Chairman Andy Biggs on The Todd Starnes Radio Show. Listen to the full interview by clicking here.

TODD: [00:44:01] You know, Congressman, you look at what’s happening with the culture of our country there on Capitol Hill. You have people like Ilhan Omar and others that are not just espousing anti-Semitic viewpoints. I mean, this goes beyond that. And now we understand Ilhan Omar has issued a clarification about her comments equating the United States and Israel to the Taliban. But is that really good enough, sir? And what are you hearing from Democrats who might, you know, disagree with Omar on this?

REP. BIGGS: [00:44:34] Well, first of all, it’s outrageous, the comments that Ilhan Omar made. And you know, what a simple apology saying, “Let me clarify. I wasn’t saying what I said.”

No, you said that. But there’s a pattern, a history, and it’s gone on and on and on and on and on. And she she’s got to be stuck with it. And then this bogus argument that Rashida Tlaib made that, oh, if you’re an Arab woman and she been a Muslim woman in Congress, you cannot have you don’t have First Amendment rights. Well, wait a second. Sure you do. All of us have First Amendment rights. And when you say something that’s outrageous, that’s pernicious to the society as a whole, which is xenophobic, hateful and anti-Semitic, guess what? We all have the opportunity to condemn that speech. That’s part of what free speech is about. It’s debate and you own it. You said it, you own it. And I have to tell you, I don’t think many of her Democratic colleagues want to continue owning this anti-Semitic trend and this hate toward America trend. A country that took her in as a refugee. I mean it is hateful for her to say what she said.

TODD: [00:45:50] I mean, at some point you just have to I mean, I don’t know, there’s a polite way to say this. But, you know, Congresswoman, if you really hate America that much, you are free to leave. I mean, you are allowed to do that as an American citizen. You can go live somewhere else.

REP. BIGGS: [00:46:05] Yeah. And think about this, too. This is a country that that you do have Rashida Tlaib to the you do have Ilhan Omar and AOC and on a bunch of radical leftist who have been elected into the United States Congress, the highest legislative body in this country. And they’re given a platform to to say and speak what they want to say. And and you’re right, if they if you don’t like the country, it’s hard to to square that circle, isn’t it, that this country that is giving you all these opportunities and use it as a governor if you will, in this country, you’re one of the people in charge of governing this country. Wow, if you don’t like this country, then then maybe there’s a different a different island for you.