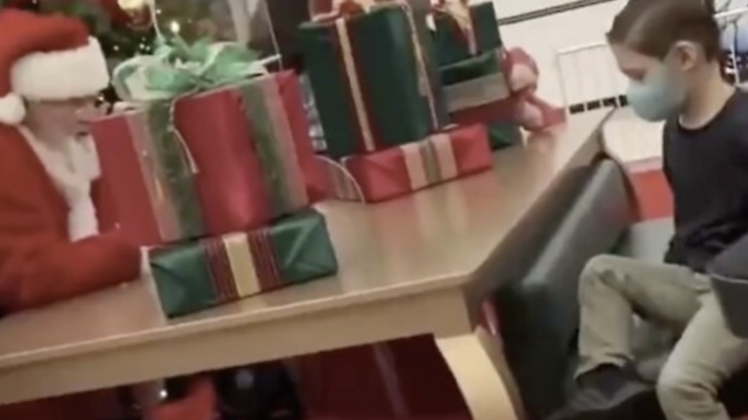 A little boy told Santa Claus that all he wanted for Christmas was a toy gun. And when Santa refused the boy’s request the distraught child burst into tears.

The absolutely terrible encounter was captured on video inside the Harlem Irving Plaza, a shopping mall in Illinois.

The boy was seen socially distancing from the wannabe St. Nick when he requested a toy Nerf gun be left underneath his Christmas tree.

Anti-Gun Santa responded, “No, no guns.”

Another voice could be heard trying to clarify that the youngster said “Nerf gun,” not a sawed-off shotgun. And Santa responded, “Nope, not even a Nerf gun.”

“If your dad wants to get it, that’s fine, but I can’t bring it to you,” anti-Gun Santa replied.

Mall officials were rightfully horrified at the behavior of the grinchy Old Saint Nick and they profusely apologized.

They posted a Facebook message noting that they were “distraught and deeply apologetic about the unfortunate incident.”

“Santa is heartbroken and crushed that he has made this child so sad and upset, and turned in his resignation,” the mall announced.

In other words, Santa got the heave-ho-ho-ho.

The mall said they work with a third-party Santa company — attempting to establish some distance between the naughty Kris Kringles and the nice.

“The Santa company will continue to remind all Santa’s how important it is to not impose personal opinions during visits with the children,” they wrote.

The mall dispatched the “real” Santa to the little boy’s home and presented him with a Nerf gun.

Meanwhile, unemployed Santa should probably lay off the vegan cookies and soy milk.