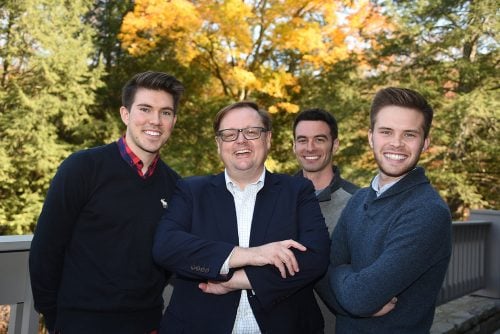 One of my favorite projects here at the Fox News Corner of the World is my annual Fox Radio Christmas show.

It’s sort of like a mash up of Grand Ole Opry meets Prairie Home Companion – just two-hours of family-friend fun – broadcast on hundreds of radio stations and FoxNews.com.

Last year we featured MercyMe and jazz legend Kirk Whalum. The year before that – we had an amazing performance by Chris Tomlin. And we always salute our military. But this year, I wanted to do something a little different.

So I invited the U.S. Army’s Six-String Soldiers to perform.  I just knew they would bring down the house with their guitars, banjo and mandolin – especially knowing that our audience loves the military.

At first, the Army was really excited about the opportunity, but they were also noncommittal.

I just assumed they were checking the calendar, but it turns out – they were investigating my Christmas show.

A few days later, I received a polite, but terse rejection letter.

“After reviewing your request, we have opined that the show is a religious event, and therefore we cannot provide official support based on restrictions in AR-360-1,” the letter read. “We value our relationship with you as well as FOX News and hope you understand our declination is guided by law and Army regulations.”

I’ve been busted, folks. What the Army alleged is the gospel truth.

My Fox Christmas show unashamedly proclaims that Jesus is the reason for the season. We are loud and proud.

In my defense, though, the reason my Christmas show is religious is because Christmas is in fact a religious holiday. I had no idea the Baby Jesus or Heralding Angels violated Army regulations.

And neither did my good friend Mike Huckabee.

“There is nothing in the law that prohibits the military from taking part in the celebration of an international holiday that has been observed from the beginnings of this nation,” the governor told me. “Does the Army have Christmas dinner for soldiers deployed? All the shipping or receiving of Christmas gifts? Allow Christmas trees in military facilities? If so, then the Army already acknowledges Christmas.”

This is what President Obama’s fundamentally transformed nation looks like, folks. It’s a nation where men and women in uniform protect Constitutional rights they are not allowed to practice.

And it’s a classic demonstration of the anti-Christian hostility in the Obama Pentagon.

“This is an example of how absurd political correctness has become,” said Tim Wildmon, president of American Family Association. “Christmas is a federal holiday. It has a special place in the heart of the American people.”

Hiram Sasser, director of litigation at First Liberty Institute, suspects the rules might be a bit different after Inauguration Day.

“I have a feeling that the United States Army will soon no longer be intimidated by Christmas carols and candy canes,” Sasser told me.

I suspect President-elect Trump and his new defense secretary won’t take kindly to a bunch of godless Grinches.

“Let’s hope the Trump administration is not faith-a-phobic and will restore simple religious liberty back to the United States and its military,” Huckabee said.

In the meantime, we will still honor the Armed Forces in my Fox Christmas show. We will salute their sacrifice and we will say a prayer on their behalf for peace on Earth goodwill to all men.