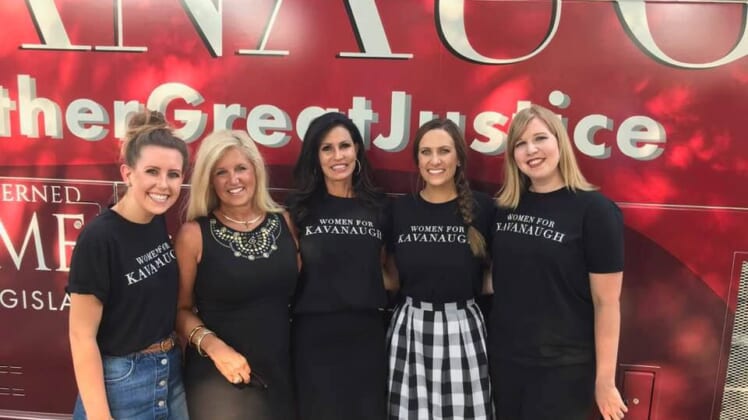 Constant disruptions and scores of arrests of loud protesters have marred the confirmation hearings of Supreme Court nominee Brett Kavanaugh, as he is grilled by the Senate Judiciary committee.

And the CEO of Concerned Women for America, Penny Young Nance, has had a front row seat for the whole spectacle.

Joining The Todd Starnes Show Wednesday, as the second day of hearings was on a brief break, Nance said that the outside hecklers, as well as antics by committee Democrats, had become so predictable that “we’re just numb to it.”

“Senator Grassley was very patient I should say, way more patient than most people would be… and so he just kind of waited them out, let them have their moment, and then went back to business,” Nance said.

Nance said she and other members of Concerned Women for America went on a “Women for Kavanaugh” bus tour in seven states across the country. CWA specifically targeted states won by President Trump in the 2016 presidential election currently represented by Democrat senators up for reelection in the November midterms.

“We wanted to make sure that our voices were heard and were given a rallying point for Concerned Women for America members in their state, and it was fantastic,” Nance said.

The CWA CEO said that Judge Kavanaugh had “conducted himself extremely well” and that his answers have been “very thoughtful.” She speculated that at least three Senate Democrats would vote to confirm the nominee, but said she was “taking nothing for granted.”

The protests and heckling on the first day caused Kavanaugh to have his daughters removed from the hearing room, a fact that Nance said she found “very upsetting.”

“It’s a shame really, that they can’t be here for this big moment for their dad,” she lamented.

“I run a grassroots women’s organization, and we are very fierce in support of the issues that we believe in, support of life and family and religious freedom,” Nance said. “But we certainly understand that street theater doesn’t work, and that people have families and we need to be respectful of each other and be dignified, maintain our dignity in every matter.”

Nance said she felt sorry for the protesters, as the organizers that brought them to the hearing “do not have their best interest at heart,” and said they were “wasting their breath.”

“It’s just bad leadership, Nance said. “It has absolutely no impact on the outcome, it might make them feel a little bit better and it might appeal to their donors, which I suspect is really what’s at the bottom of it.”