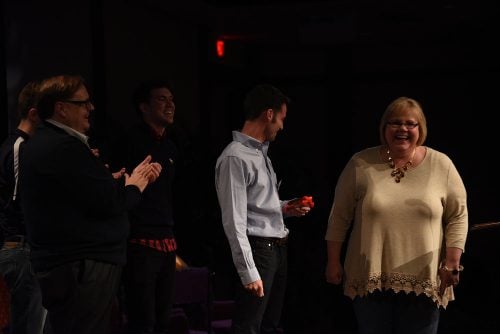 It’s not exactly clear why Buzzfeed chose to publicly shame Fixer Upper hosts Chip and Joanna Gaines. Nor do we know why the online publication attacked the Christian couple’s church.

We may never know. Regardless, their ugly attack on the Gaines family and Antioch Community Church in Waco cannot be undone.

“The real shame is not on the Gaines family, but on this media inquisition of Christianity,” National Religious Broadcasters president Jerry A. Johnson told me.

Earlier this week, Buzzfeed raised  questions about the Gaines family church and its position on same sex marriage.

“And their pastor, Jimmy Seibert, who described the Gaineses as ‘dear friends’ in a recent video, takes a hard line against same-sex marriage and promotes converting LGBT people into being straight,” Buzzfeed breathlessly reported.

“So are the Gaineses against same-sex marriage?” the writer demanded to know. “And would they ever feature a same-sex couple on the show, as have HGTV’s House Hunters and Property Brothers?”

Why is that the business of Buzzfeed? Do they expect Chip and Joanna to inquire about the sexual proclivities of potential clients?

“Fixer Upper has fans of all stripes: Christians, feminists and LGBT viewers have all found something to love in the Gaineses,” she wrote. “So in the absence of a response from them or their representatives, it’s worth looking at the severe, unmoving position Seibert and Antioch take on same-sex marriage.”

For the record, it’s the same position taken by most Evangelical churches in the nation – not to mention the Roman Catholic Church. Does Buzzfeed plan investigating HGTV’s Catholic home improvement hosts?

“Fake scandals are as bad as fake news, and this is a fake scandal,” said Dr. Johnson told me. “In fact, millions of Americans go to tens of thousands of churches that teach in agreement with President Obama’s original position against ‘same-sex marriage’ – because ‘God is in the mix.’”

“Unlike the President, most pastors have not changed their position,” Johnson told me. “They know that the biblical pattern for sexuality is male/female, not “same sex” relationships. If the Gaines’ church has that kind of pastor, they are in the mainstream of American Christianity, as well as many other religious traditions on this issue. The real shame is not on the Gaines family, but on this media inquisition of Christianity.”

So let’s cut to the chase – is Antioch Community Church anti-gay?

“Absolutely not, Pastor Seibert told me in an exclusive interview. “We are not only not anti-gay, but we are pro-helping people in their journey to find out who God is and who He has made them to be.”

The pastor told me he was surprised by the controversy surrounding a message he delivered more than a year ago pointing out that people from all different walks of life attend the church.

“For us – our heart has always been to love Jesus, preach the word of God and help people in their journey,” he said.

But what about the church’s position on same-sex marriage?

Our definition is not the definition we made up. It’s straight from the Scripture,” the pastor said. “One man, one woman for life. That’s how God created us. That’s what he has for us.”

“The main reason for the sermon is for the confused middle – the majority of America. People don’t know what the Bible says anymore on issues of sexuality,” he added. “People don’t know what God says on homosexuality or any other issue. I felt the need to say we are all a mess – but the fixed points were set by God – not us.”

Chip and Joanna have been members of the church for 15 years and are dear friends with pastor Seibert.

“This is who they have always been,” he said. “They are tremendous people with tremendous values and I’ve known them for many, many years.”

The pastor said over the past few days he’s exchanged text messages with the Gaines – but he declined to reveal the content of their conversations.

But he did offer some words of encouragement to other Christians facing similar attacks.

“Do we believe that God and his word is right and enough? As a believer, I need to do what’s right and trust God with what’s wrong,” he said.

He also called on fellow Christians to stand together in the face of adversity.

“Support one another when people make stands,” he said. “Don’t leave them out there alone. Let’s get behind them and support them and love them and pray for them.”

And at the end of the day – no matter what – know that God is ultimately in control.

“If we believe God and his Word is the answer to every problem on the planet, then we’ve got to live it out in our own lives,” the pastor said.

Great words of encouragement as we face an onslaught from a small, but vocal mob of anti-Christian bullies.