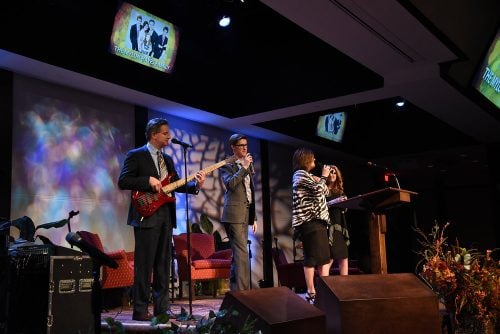 One of my guilty pleasures in life is to watch Fixer Upper marathons on HGTV.

Hosts Chip and Joanna Gaines have not only made Waco, Texas a tourist destination, but they’ve also educated us about the many uses of shiplap.

Click here for a free subscription to Todd’s Newsletter: a must-read for Conservatives!

If you aren’t a fan of the show, you might want to Google that.

I also appreciate that Chip and Joanna are devout Christians. Viewers can see how their faith flavors not only their television program – but also their family life.

Click here to get Todd’s best-selling book – a primer on fighting the culture war!

But not everyone appreciates those Christian beliefs – especially the militant LGBT crowd.

And now, they are on the warpath.

The Mainstream Media and militant LGBT activists are unleashing their fury over reports the Gaines family attends Antioch Community Church, a non-denominational megachurch.

“Chip and Joanna Gaines’s Pastor Preaches ‘Homosexuality is a Sin’” – blared a headline on Cosmopolitan.

“Chip and Joanna Gaines’ Church is Firmly Against Same-Sex Marriage,” screamed a Buzzfeed headline. “Their pastor considers homosexuality to be a ‘sin’ caused by abuse – whether the Fixer Upper couple agrees is unclear.”

What the shiplap, America?!”

“Their pastor, Jimmy Seibert, is both staunchly against same-sex marriage and a strong believer that homosexuality is a ‘lifestyle’ choice and a ‘sin’,” Cosmo reported.

This bit of news was more than their feeble journalistic minds could handle.

“Given the diversity of Fixer Upper’s audience, this is a startling revelation that has left many wondering where Chip and Jo stand,” Cosmo reported.

Buzzfeed went so far as to investigate Pastor Seibert’s sermons – demonstrating that what is preached from the pulpit at Antioch Community Church is the same kind of message being preached in nearly every evangelical church in America.

Our friends at Newsbusters tracked down this item from US Weekly:

“As a Fixer Upper fan, I would love to know @joannagaines and @chippergaines’s thoughts on their pastor’s hateful, anti-LGBT beliefs,” one viewer declared. Another went further, writing: “If Chip and Joanna Gaines end up being anti-LGBT, I am cancelling my mag subscription and ignoring their show.”

An HGTV spokesperson told me in a statement, they “respect the privacy of our show hosts and will not comment on matters related to their personal lives.”

Understandably, neither the Gaines family nor the church wanted to comment. And nor should they have to comment.

“While fans shouldn’t necessarily jump to conclusions about what this might mean, for many people who watch the show, their silence speaks volumes,” Cosmo wrote. ‘Here’s hoping they speak up about this soon.”

Well, here’s a truth bomb for Cosmo and Buzzfeed. It’s really none of your business where Chip and Joanna Gaines worship.

And for the record, where were their hysterical screeds when President Obama’s pastor was asking God to damn America? Anybody want to talk about those roosting chickens?

If anybody knows what Chip and Joanna are going through it is David and Jason Benham.

The Benham Brothers, who run a very successful North Carolina real estate company, were fired from HGTV in 2014 after a militant LGBT mob bullied the network into submission.

The brothers are well-known evangelical Christian leaders – and are outspoken proponents of traditional marriage.

“We were actually filming our show the exact same time the Gaines were filming their first episode,” David told me. “We developed a great relationship.”

And the first telephone call the brothers received when they were given the heave-ho was from Chip.

“He called to support us – to say, ‘Guys, I’m in this with you, brother,” Jason said. “The Gaines’ believe as we do – as millions as other Christians do – that marriage is between a man and a woman.”

The Benham Brothers said they especially feel bad for HGTV being pushed into another faux controversy.

It’s absolutely true that the Gaines family attends a church that believes marriage is between one man and one woman.

Should that disqualify them from having a television program on HGTV?

Do the militant LGBT activists want to create a Black List – banning individuals who attend evangelical Christian churches from working in the industry? Is that what they really want?

Friends, this is nothing more than a modern-day witch hunt.

And it’s time for all freedom-loving Americans to rise up and stand with HGTV and the Gaines family. To the militant LGBT mob, we say stand down.

Buzzfeed quoted a rather appropriate statement from one of Pastor Seibert’s messages:

“We’re being called to a higher calling. A greater compassion and love, but a greater clarity than ever before. Because it is coming now. Starting Monday morning, we will not have that option anymore. And with that, will come persecution.”