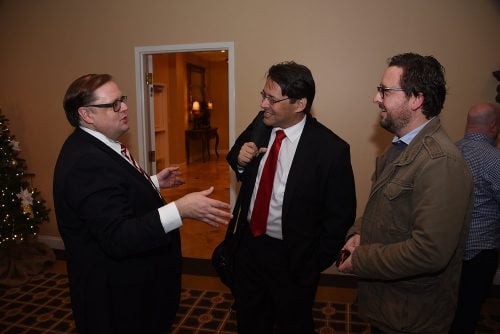 Rodney Ivester, of Corinth, Texas, is the kind of guy you’d like as a neighbor. He maintains a tidy lawn, doesn’t make much of a racket and he flies an American flag.

About three weeks ago, Rodney decided to post another flag alongside Old Glory – to honor law enforcement. It’s a black & white version of the U.S. flag adorned with a blue stripe.

He told me that posting the flag was a small way that he could honor the memory of the five police officers gunned down in Dallas in July.

“I love my country and I wanted to show my support for law enforcement and military personnel,” he told me. “I put the flag up so that I can honor the fallen officers and support those that are in the heat of the battle.”

Rodney’s neighbor is a police officer and he was genuinely touched by the simple gesture – a message of solidarity.

But the other day, he received a terse note from the his property owner’s association.

It turns out that someone had complained about the pro-police flag and it had to come down. They accused him of violating a covenant.

“No noxious or offensive activity shall be undertaken on the property, and nothing shall be done which is or may become an annoyance or nuisance to the neighborhood,” they wrote in bold letters.

He was given explicit instructions: “Please remove the altered American flag from your property and store out of public view.”

Now, Rodney is not a rabble-rouser.

“I don’t cause problems, but I do want to support my community and those that serve,” he said. “I do not understand the attacks on good folks supporting their own country.”

I called the property owner’s association to get their side of the story but they have not returned my call.

“They stepped on my rights as a U.S. citizen and patriot,” Rodney told me. “This is an attempt to suppress my First Amendment rights while simultaneously disrespecting America and the police.”

It certainly would appear that way – I mean calling a pro-police flag a noxious activity? Sweet mercy, folks.

Rodney asked the property owner’s association for a copy of the rule that he supposedly violated – but was given no clear answer.

“They said another resident complained and they said if one person complains they have to take action,” he said.

He also pointed out that other homeowners fly all sorts of flags – supporting athletic teams and the Lone Star State.

Rodney tells me the pro-police flag is still flying – in defiance of the property owner’s association.  That defiance could lead to fines of nearly $100 per day.

“The neighbors around me cannot believe what is going on with this or that it’s even an issue,” he said.

Rodney is a good fellow. He’s a church-going man who enjoys sweet tea and the chicken fried steak at Babes.

That flag waving outside his home sends a message to law enforcement.

Rodney Ivester has their back. And when it’s all said and done – I reckon they will have his back, too.