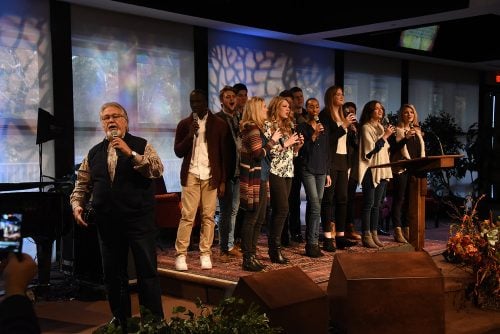 Christmas carolers at the University Town Center Mall in Sarasota, Florida will not have to sing “Grandma Got Run Over By a Reindeer” in Latin after all.

The shopping mall is backing away from a memorandum that was sent to local choral groups that urged them to refrain from singing certain Christmas carols in English.

The good folks at the American Family Association obtained a copy of the memo:

“For choral groups, the Mall prefers no clearly recognizable Christian music, such as carols sung in English, spirituals or gospel. Classical holiday music or music sung in a foreign language such as Latin, French, Spanish, Italian or German is fine.”

“By the mall’s standards, church groups and choirs requesting to perform would be rejected because Handel’s Messiah and Ave Maria and other songs proclaiming Jesus’ birth do not meet the mall’s desire to eliminate ‘Christian’ music,” AFA president Tim Wildmon wrote in a letter to supporters.

But hark — there’s no need for carolers to rush out and register for Rosetta Stone.

A spokesperson for Taubman Properties tells choirs are still allowed to sing “Joy to the World” and “Silent Night” in English.

Here’s the statement they sent me:

“The materials created and distributed by a third party company relating to the hiring of performance groups for UTC were not reviewed by UTC staff in advance of distribution.  These materials do not in any way represent an existing center policy or viewpoint. We apologize for any confusion this may have caused within the Sarasota community.”

Sounds like a pretty sincere apology to me, Christmas carolers. So, pack away your pocket translators and get ready to belt out some yuletide cheer.

I’m glad that got resolved. I was feeling sorry for the kids who were going to have to sing “The Hawaiian Christmas Song” in Cantonese.