Rep. Arrington: Biden is telling Migrants, Cross Our Borders, Violate Our Laws and You Will Be Rewarded 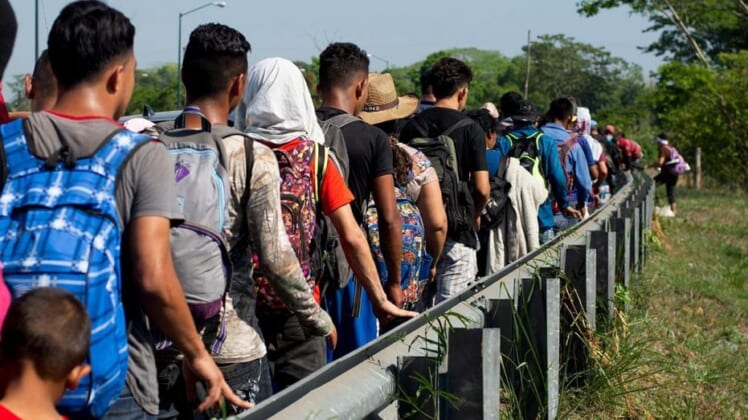 STARNES: On the Liberty University newsmaker line. Our good friend, Congressman Jodey Arrington, a Republican Congressman from Texas. They’re calling it a crisis at the border. I think it’s really an apocalypse. I mean, this is just jaw dropping. Even the Mexican government, they’re they’re asking, What in the world is Biden up to?

ARRINGTON: President Trump, say what you want about his style and personality but look what he did. He did what it took. He had the political courage to actually put the measures in place to drop illegal border crossings by 75%. And he actually got the country of Mexico to do more to stop illegal immigration and secure the border than the United States Congress. And now you’ve got a president that has basically just opened up the floodgates by unwinding everything that Trump put in place just because it has the name of Trump on it, irrespective of the merits. And he’s also a president who’s placating the left. I mean, he will just do whatever they demand. And now we’re paying. He’s sowing the wind, and border states like Texas, especially, are reaping the whirlwind and these poor people who are being exploited by the cartels. And these kids who are being used as a passport who are being trafficked here at record numbers, tripled the number. It’s an abomination. And, uh, and it is a crisis. Even though Biden won’t say it, he’s suspending reality for a while again. But it’s it’s horrible for the country and its devastating border communities.

STARNES: What the Biden administration doing to these tens of thousands of Children at the border? Would you say this is akin to child abuse?

ARRINGTON: Oh, it is absolutely first of all, aiding and abetting and enabling that abuse that starts long before they come across the border. Right with these drug cartels whose new best business line is human smuggling. But yes, they get over here and of course, Biden said we’d only have 50 percent capacity. They’ve blown through that. Some have upwards of 100 percent capacity, and meanwhile, he can’t do anything to the unions who they’re trying to line their pockets with Covid money to open the doors to our struggling students. But he’ll put these kids together and he’ll release them into the interior of our country even though if you and I took a trip outside of the country and we tested positive, we can’t get back into our own country. We can’t get to our house. But meanwhile, it’s free for all for folks who’ve broken the law, violated our sovereignty and compromised the American people’s safety and security.

STARNES: Yeah, that’s this is a great This is the big concern I have Congressman one set of rules for the illegals, another set for law abiding American citizens. But again, you’re looking at all these Children. I just don’t know how they’re able to release these kids into the interior without knowing who their parents are, ho their legal guardian. it’s mind blowing.

ARRINGTON: They don’t know. They don’t have a clue. All they’re doing is trying to a satisfy an insatiable appetite from the radical open border left. And now they’ve just got a firestorm. And you’ve got 300-plus kids being detained a day. We are on pace to have 120,000 this year, which is 30 percent over the prior record year. So the signal is clear. President Biden is not prioritizing the safety of the American people. And the other message to the rest of the world is cross our borders, violate our laws and you will not be detained and deported. You will be released and rewarded. And that incentive, that encouragement and enablement is what’s creating an epic disaster. As you said, unmitigated disaster and crisis.

STARNES: All right, Congressman, we’re gonna have to leave it there. We’ve got to head out for a break. But we really appreciate the time you spent with us. And thanks to the, uh, the important news coming from the the border.