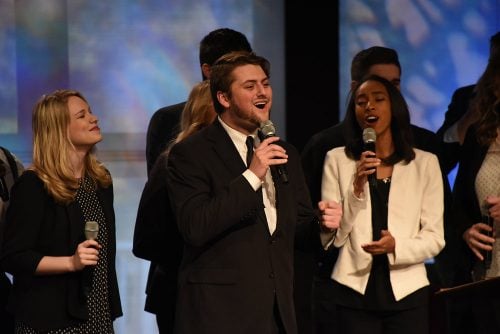 One of the most poignant scenes in “A Charlie Brown Christmas” is when Linus stands on a stage and recites a passage from the Holy Bible describing the Christmas story.

“For unto you is born this day in the city of David a savior which is Christ the Lord. That’s what Christmas is all about, Charlie Brown,” Linus said.

It really does sum up the true meaning – the true reason for the holiday season – the birth of our Lord.

Dedra Shannon, a staffer at Patterson Middle School in Killeen, Texas, was so inspired by the scene she decided to use images to decorate the door to the nurse’s office.

The decorations included a picture of Linus, the scrawny Christmas tree and that classic passage of dialogue about the true meaning of the holiday.

The decorations were installed on Dec. 5 and on Dec. 7 Ms. Shannon was confronted by the school’s principal.

“She said, ‘please don’t hate me, but unfortunately you’re going to have to take your poster down,” Ms. Shannon said. “I’m disappointed. It is a slap in the face of Christianity.”

The principal went on to explain that the poster violated the U.S. Constitution.

“She said my poster is an issue of separation of church and state,” Ms. Shannon told me. “She said the poster had to come down because it might offend kids from other religions or those who do not have a religion.”

Ms. Shannon was told she could keep Linus on the door – but the Bible passage had to be removed.

“I just took the entire thing down,” she said. “I wasn’t going to leave Linus and the Christmas tree without having the dialogue. That’s the whole point of why it was put up.”

Besides, there were plenty of other posters promoting all sorts of events and clubs on campus – so why target the Christmas-themed poster?

“Throughout the school there are talks about diversity. Well, you aren’t being very diverse if you are not allowing the Christians to put something up that refers to a Christian holiday,” she said.

That’s a really good point. And don’t forget – Christmas is a federal holiday.

Danny Breyeris the pastor of the Soldiers of the Cross Cowboy Fellowship near Fort Hood. He is also Ms. Shannon’s father.

Pastor Breyer was the one who first alerted me to the Yuletide Grinches at Patterson Middle School.

“People want us to be tolerant for everything – but they don’t tolerate Christianity,” he said. “They bow down to everything else – but when it comes to Christianity…”

Those who holler about tolerance are the least tolerant of all.

It’s not the first time “A Charlie Brown Christmas” has caused holiday controversy. Last year, a school canceled a stage performance of the Christmas classic over similar constitutional concerns.

Public schools are supposed to be in the education business and Ms. Shannon was simply educating students about the true meaning of Christmas.

And boys and girls really do need to know what Christmas is really all about. Right, Charlie Brown?