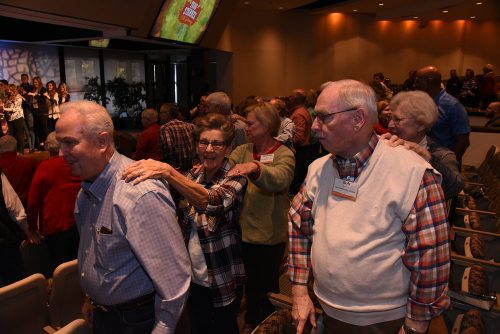 A lay minister who is suing the Georgia Department of Public Health for religious discrimination has been directed by the state’s attorney general to relinquish his sermons to the government, according to federal court documents.

Dr. Walsh said he will not comply with the request.

“No government has the right to require a pastor to turn over his sermons,” Walsh said. “I cannot and will not give up my sermons unless I am forced to do so.”

Walsh, a Seventh-day Adventist lay minister had been hired in May 2014 by as a District Health Director with the Georgia Department of Public Health. A week later, a government official asked him to submit copies of his sermons for review. He complied and two days later he was fired.

His attorneys said the government was curious about sermons Dr. Walsh delivered on health, marriage, sexuality, world religions, science and creationism. He also preached on what the Bible says regarding homosexuality.

He has since filed a federal lawsuit charging state officials with engaging in religious discrimination.

“He was fired for something he said in a sermon,” attorney Jeremy Dys told me. “If the government is allowed to fire someone over what he said in his sermons, they can come after any of us for our beliefs on anything.”

Dr. Walsh has assembled a powerhouse legal team comprised of Parks, Chesin & Walbert along with First Liberty Institute, one of the nation’s most prominent religious liberty law firms.

“It’s an incredible intrusion on the sanctity of the pulpit,” Dys said. “This is probably the most invasive reach into the pulpit by the state that I’ve ever seen.”

Neither the attorney general nor his communication director responded to telephone calls or email correspondence.

Dys said the government’s request came as part of the process to build their case against his client. The request, he said, carries the same force of law as a subpoena.

“Pastors and rabbis across the country – especially in the state of Georgia should be frightened that a state would demand all the sermon notes and transcripts of a pastor,” he said. “This is unprecedented.”

It may be unprecedented, but is it illegal?

Family Research Council president Tony Perkins condemned the state’s demand calling it “an alarming display of government intrusion into the sanctity of the church, pastor’s study and pulpit.”

“This is something that I would have expected to see in a communist country, not America,” Perkins told me. “Government scrutiny of speech in the pulpit is unconstitutional, and unconscionable.”

He called on Gov. Nathan Deal, a Republican, to “correct this egregious overreach of the state into church affairs.”

Dr. Walsh also gained the support of Emir Caner, president of Truett-McConnell University, a Christian school based in Cleveland, Georgia.

“A new era has come to our shores, a time where government finds it acceptable to suppress the freedom of religion even to the extent of requesting a minister’s sermons,” Caner said. “As an ordained minister, I know that this is not merely an assault on the messenger, but on the very message of our Sacred Scriptures.”

“What the government fails to recognize is that ministers of the Gospel are not hirelings of the state, but ambassadors for our Lord,” he said.

Dr. Walsh was catapulted into the national spotlight when he was invited to deliver the 2014 commencement address at Pasadena City College in California.

Walsh, who was then the director of the city’s public health department, came under fierce scrutiny from LGBT activists and students after someone found online copies of his sermons. He backed out of the speaking engagement – but critics persisted and he was forced to resign his post – after reaching a financial settlement with the city.

Shortly afterwards, he applied for the position in Georgia.

“The state of Georgia fired him for something he said in a sermon,” Dys told me. “It’s almost like the state ransacking the pastor’s study trying to find evidence in a desperate attempt to justify their illegal behavior.”

Dys said the attorney general could ask a judge to enforce their request. If Dr. Walsh still refused, he could face contempt of court.

“No one in America should want a pastor being held in contempt for refusing to give up one of his sermons to the state of Georgia,” he said