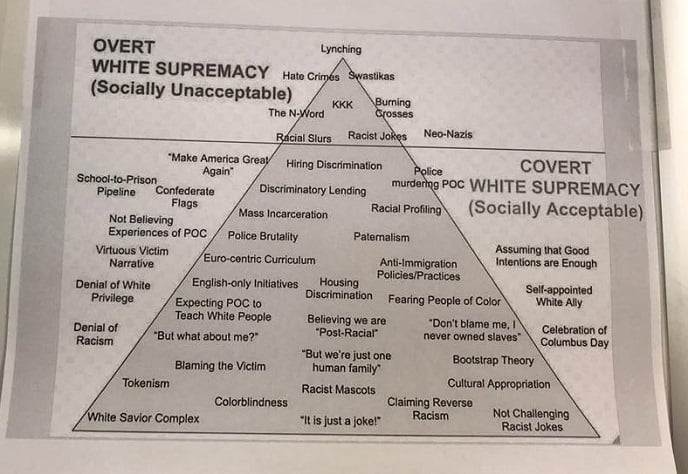 A North Carolina teacher displayed a poster in her classroom that described the phrase “Make America Great Again” as an example of white supremacy.

Parents are furious over what they call overt and extreme political indoctrination inside a French class at Franklin Academy High School.

The poster featured a “White Supremacy Pyramid” that provided examples of overt and covert white supremacy. It was first reported by American Lens.

Among the examples of overt white supremacy – deemed socially unacceptable are hate crimes, racial slurs, burning crosses and the KKK.

In other words, if you are a white person who marches in a Columbus Day parade, eats a taco on Cinco de Mayo or picks yourself up by your bootstraps – well you could be a flaming white supremacist.

The phrase “Make America Great Again” is also listed on the poster.

Parents and students told American Lens the French teacher warned students that anyone who uttered the words, “Make America Great Again” would be sent to the principal’s office.

“One family tells American Lens that Gilbert has recently been wearing a t-shirt to class that reads, ‘Immigrants are what make America great,’” the online website reported.

I reached out to Franklin Academy High School administrator James Kornegay via telephone and email.

I asked a series of questions:

1.      Was the white supremacy pyramid part of an official school curriculum?

2.      Why was the pyramid posted inside the classroom?

I received a one-sentence reply from Mr. Kornegay:

“Per our policy, we are unable to comment on personnel matters at our school. Our administration is appropriately addressing any issues that may arise,” he wrote.

It’s unfortunate that a taxpayer-funded school has been turned into an anti-Trump indoctrination camp. I’m glad that parents and students have chosen to speak out – and hopefully this teacher has been removed from the classroom.

I do have one more question for the folks who run the Franklin Academy Indoctrination Camp. Could someone explain what white supremacy has to do with teaching kids to speak French, s’il vois plait?