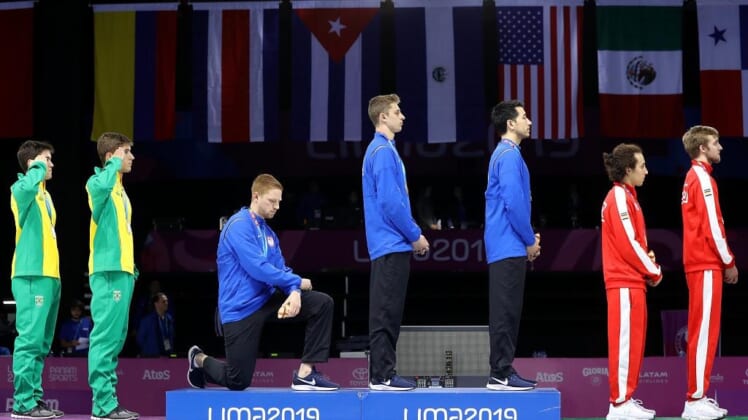 Mr. Imboden was apparently triggered by the rocket’s red glare and suffered a massive outbreak of microaggressions. He later addressed his behavior on Twitter, from the confines of his designated safe space.

“We must call for change,” he declared.

We must call for change.
This week I am honored to represent Team USA at the Pan Am Games, taking home Gold and Bronze. My pride however has been cut short by the multiple shortcomings of the country I hold so dear to my heart. Racism, Gun Control, mistreatment of immigrants, pic.twitter.com/deCOKaHQI9

Mr. Imboden said he was honored to represent America at the Pan Am games — but faster than Colin Kaepernick could say “Betsy Ross,” the young fencer turned on his native country.

“My pride however has been cut short by the multiple shortcomings of the country I hold so dear to my heart,” he wrote. “Racism, Gun Control, mistreatment of immigrants, and a president who spreads hate are at the top of a long list.”

The 26-year-old member of Team USA defended his unpatriotic protest and called on other athletes to join his cause.

“I chose to sacrifice my moment today at the top of the podium to call attention to issues that I beleive need to be addressed,” he said. “I encourage others to please use your platforms for empowerment and change.”

A spokesman for the United States Olympic and Paralympic Committee denounced the athlete’s political spectacle.

““Every athlete competing at the 2019 Pan American Games commits to terms of eligibility, including to refrain from demonstrations that are political in nature,” spokesman Mark Jones told Associated Press. “In this case, Race didn’t adhere to the commitment he made to the organizing committee and the USOPC.”

Mr. Imboden brought shame upon himself, his family, his teammates and most of all – the nation. It was a selfish, disloyal and unpatriotic slap in the face.

At the very least he owes the country an unequivocal apology. Regardless, Mr. Imboden must be removed from the team and replaced with a fencer who actually loves the nation he is representing.

“We respect his rights to express his viewpoints, but we are disappointed that he chose not to honor his commitment,” Jones said in the statement. “Our leadership are reviewing what consequences may result.”

Quite frankly, he should’ve been yanked off the platform, stripped of his medal, ordered to turn in his uniform, and instructed to find his own way back to the United States.

Just because an athlete is a perpetually offended millennial snowflake is no excuse to be an unpatriotic jackass.