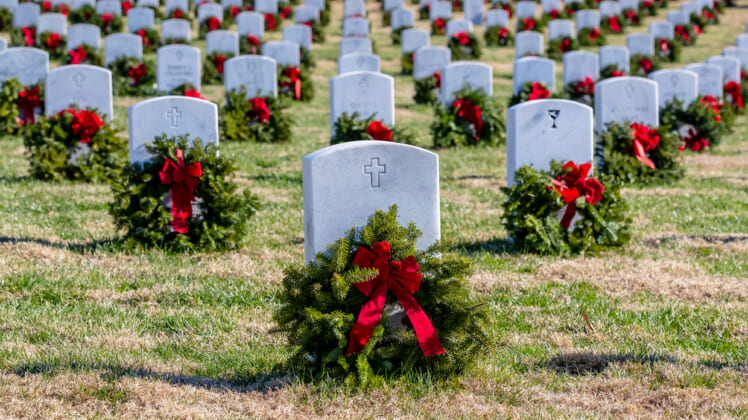 The Military Religious Freedom Foundation is accusing Wreaths Across America of Christian “carpet-bombing.”

The group’s president Michael ‘Mikey’ Weinstein says the families have not consented to the wreaths being placed on tombstones of veterans.

“We’re not saying you can’t [place wreaths], but you cannot blanket it like that. That’s like carpet-bombing,” Weinstein told Fox News.

Weinstein’s group attacked Wreaths ACross America on Nov. 22 ahead of their plan to lay wreaths on 155 national cemeteries and other locations where veterans are buried on Dec. 18.

“The grave sites of Christians and non-Christians alike will be adorned with this hijacked-from-paganism symbol of Christianity — circular and made of evergreen to symbolize everlasting life through Jesus Christ — whether the families of the deceased veterans like it or not,” Weinstein’s statement read.

But Wreaths Across America isn’t Christian or political.

Karen Worcester, the organization’s executive director, said they’ve “never been asked not to” place wreaths for veterans of non-Christian faiths, such as Islam.

First Liberty Institute, one of the nation’s most prominent religious freedom law firms, slammed Weinstein as a bully in a statement to Starnes Media Group.

“Mikey Weinstein continues his bully tactics, no matter who he hurts. But as with all bullies, all it takes is for someone to stand up to him,” First Liberty Insitute attorney Mike Berry said.

“We’ve stood up to and beaten Weinstein in the past, and we’re happy to do it again, free of charge,” Berry said. “First Liberty has a proud record of defending our service members and veterans, and we’d be happy to represent Wreaths Across America and its right to honor our veterans.”