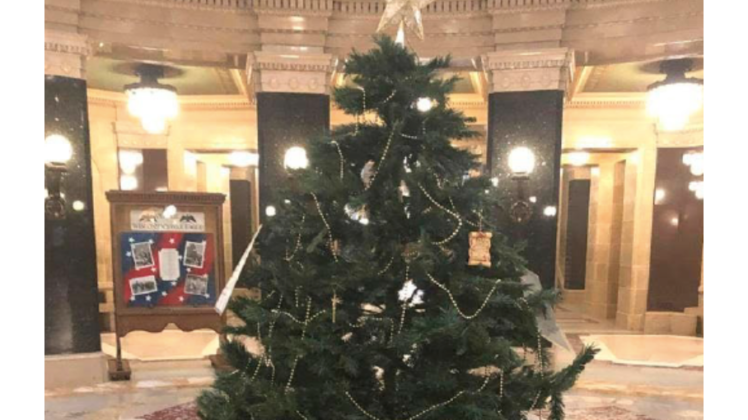 There is a Christmas tree controversy in the rotunda of the Wisconsin state capitol.

Governor Tony Evers – who is a Democrat – decided not to put a tree in the building this year – ending a 100 year tradition.

He blamed his decision on the China Virus – that’s the reason why.

“He called it a holiday tree. We all call it a Christmas tree.” State Rep. Paul Tittl said on the Todd Starnes Radio Show.

Tittle and fellow Republican Shae Sortwell decided to ask permission to haul out the holly and deck the rotunda with some yuletide spirit in spite of the governor’s decision.

“I mean, it’s over 100 year tradition, and we thought, This is ridiculous. You know, why can’t you put up a tree,” Tittl said.

State bureaucrats turned down their request – so the lawmakers decided to take matters into their own hands.

They bought their own Christmas tree and set it up in the middle of the rotunda.

“Christmas is alive in the Wisconsin state capital,” the state lawmaker said on my radio program.

That set off Democrats who accused the Republicans of bypassing the committee process and breaking statehouse rules.

It also offended the Freedom From Religion Foundation, a notorious bunch of atheists who get triggered by the Baby Jesus.

“The state of Wisconsin is not obligated to allow private citizens, even if they are state representatives, to erect unattended displays on state property,” FFRF Co-Presidents Dan Barker and Annie Laurie Gaylor wrote in a letter to the governor.

Whether or not the governor allows the tree to stand is not clear – but it’s really absurd.

“This has been a horrible year with the COVID,” the lawmaker said. “And we were just trying to give people some hope.”

The good people of Wisconsin have been through a lot this year – we all have – and what better way to remember the hope we have than gathering around a Christmas Tree?