Banning ‘In God We Trust’ From The Public Square Is ‘Ludicrous’ 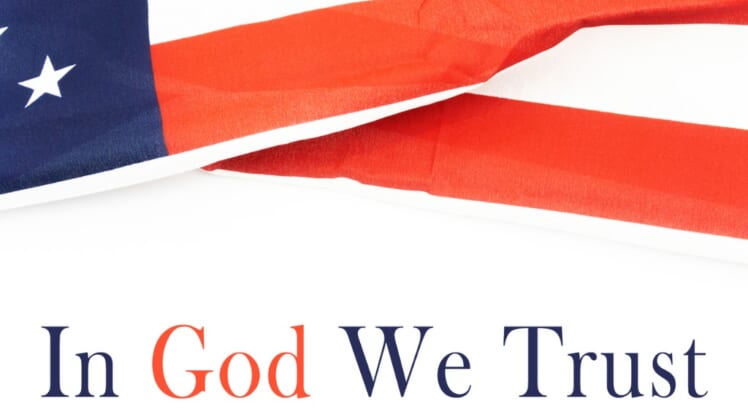 (The article first appeared in The Daily Wire.)

The good citizens of South Dakota have elected to adorn their public schools with the nation’s motto: “In God We Trust.” As you might expect, some still view those four words on anything public as an impermissible establishment of religion, a violation of the First Amendment to the U.S. Constitution. It is not. A brief review of our history and law explains why.

Go back to the War of 1812 and one will find reference to one of the earliest versions of what became the national motto. It is in the less well-known fourth verse of Francis Scott Key’s “Star Spangled Banner,” in which we read, “And this be our motto: ‘In God is our Trust.’”

With the republic not yet through its fourth presidency, the idea that “In God We Trust” could be our national motto was so firmly established in the minds of our nascent nation that Key could pen those words with confidence.

Eisenhower Made “In God We Trust” Our Motto

A generation later, in 1864, Congress authorized the Treasury Secretary to include the phrase “In God We Trust” on our one- and two-cent coins. By 1956, following the signature of President Eisenhower, the motto officially became the nation’s. A year later, Congress added it to our paper currency.

There’s more to the historical use of the phrase, including an early reference to the phrase’s use by a militia group Benjamin Franklin raised during the American Revolution. The point is that “In God We Trust” has been the official, or at least presumptive, motto of the United States for a long, long time.

And the courts have noticed and agreed. Every federal circuit court to have considered the motto has deemed it constitutional — that’s 10 of the 11 numbered circuit courts of appeal, plus the U.S. Court of Appeals for the D.C. Circuit!

Court: Acknowledging Religion is Not Endorsement of Religion

The Eleventh Circuit, for instance, explained in Glassroth v. Moore that “some acknowledgement of religion,” including the national motto, “are not endorsements of religion.”

In Gaylor v. United States, the Tenth Circuit noted that the phrase’s “primary effect is not to advance religion; instead, it is a form of ‘ceremonial deism.’” In other words, no one thinks those words, displayed on public property — for instance, the Speaker’s rostrum of the U.S. House of Representatives — amount to an establishment of religion.

Instead, the motto is, as the Seventh Circuit explained in Sherman v. Community Consolidated School District 21 of Wheeling Township, “interwoven … so deeply into the fabric of our civil polity” as to become a treasured part of our “patriotic exercises and activities.” And, “whatever may have been their origins, no longer [do these words] have a religious purpose or meaning.”

In 1970, the not-so-conservative Ninth Circuit evaluated the national motto in Aronow v. United States. “It is quite obvious,” observed the court, “that the national motto and slogan on coinage and currency ‘In God We Trust’ has nothing whatsoever to do with the establishment of religion.”

Go back and read that slowly. The Ninth Circuit told America — including anti-religionists annoyed by the public sight of anything religious — that it should be “quite obvious” that the national motto “has nothing whatsoever to do with the establishment of religion.”

Motto Does Not Offend Constitution

Forty-three years later, the Ninth Circuit reaffirmed that holding in Newdow v. Lefevre. If it was obvious in 1970, it should be incandescently clear today: The national motto harmonizes perfectly with our nation’s history and heritage and does not offend our U.S. Constitution.

And, just to be clear, the U.S. Supreme Court agrees with its lower courts. As the Sixth Circuit explained in ACLU of Ohio v. Capitol Square Review & Advisory Board, “The Supreme Court has never questioned the proposition that the national motto can survive scrutiny under the Establishment Clause, and we should be utterly amazed if the Court were to question the motto’s constitutionality now.”

Still, many activists lament the presence of the phrase in public. One anti-religion activist exclaimed that South Dakota’s recent effort is “inaccurate, exclusionary, and aimed at brainwashing American schoolchildren.”

The only brainwashing seems to be from anti-religion activists set on a mission of exclusion and the perpetuation of inaccurate information. Though they still seem willing to accept dollar bills bearing the phrase to fuel their anti-religion efforts, they demand the rest of the country ignore its own history and the myriad court decisions that clearly undermine their legal position.

Should you run up against someone arguing that “In God We Trust” violates the law, you can respond as the Sixth Circuit has at “the idea of any federal court having the temerity” to ban the motto from government property.

That idea, the judges concluded, “strikes us as ludicrous.”