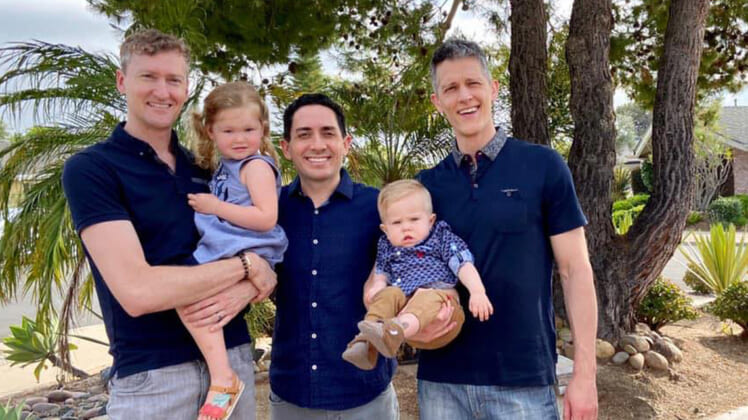 While the media celebrates a gay, polyamorous throuple who was given legal custody of two children, a children’s rights activist says the California judge’s ruling sacrifices the kids’ wellbeing for adult desires.

The three men – Ian Jenkins, Alan Mayfield, and Jeremy Allen Hodges – became the first to be listed as three dads on a birth certificate in a 2017 ruling.

Best-selling author Todd Starnes warned Americans about a cultural free-for-all in the aftermath of the Supreme Court’s decision to redefine marriage.

“The ultimate goal of the sex and gender revolutionaries is to destroy the traditional American family,” Starnes wrote in “Culture Jihad: How to Stop the Left From Killing a Nation.”

With a new book out called “Three Dads and a Baby,” they are speaking out about the legal challenge as they raise Piper, a 3-year-old daughter, and Parker, a 1-year-old son, both conceived using donated embryos and a surrogate.

“It was a pretty interesting, tense courtroom scene where at first it seemed we were not going to be granted that and we asked to speak in court and plead our viewpoint and the judge ultimately changed her mind and granted us legal parentage for our child before she was born,” Mayfield told “The Morning Show” in Australia.

Katy Faust, the daughter of two lesbians and founder of children’s rights organization, Them Before Us, said the three men are not victims despite their story.

“Of course the real victims are the two motherless children who were intentionally separated from the woman who provided half of their genetic identity, the woman to whom they bonded during their first 9 1/2 months of life, and who will be starved of the daily maternal love that all children crave,” Faust told The Christian Post.

She said the family structure is being shifted from the wellbeing of the children to the desires of adults.

“That slippery slope of ‘if the adults are happy the children will be happy’ which began with no-fault divorce, normalized single mothers by choice, insisted gender is irrelevant to parenting during the gay marriage debate, is now championing male throuples raising motherless children,” she added.

“Until we recognize that children have a natural and fundamental right to be known and loved by both their mother and father, you can expect more wild variations of the modern family, as children become the acceptable sacrifice on the pyre of adult desires.”