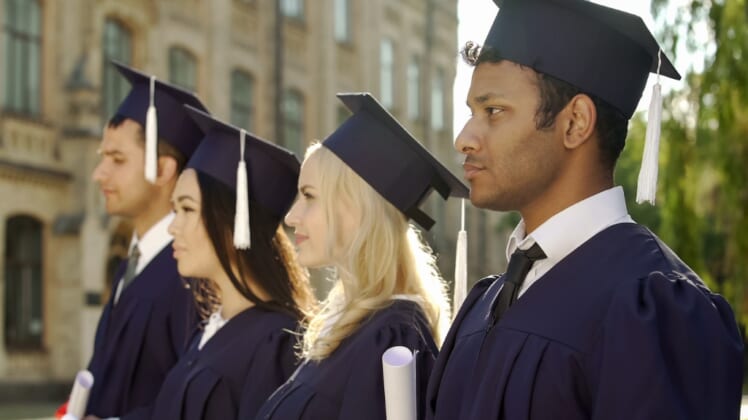 Anyone who delivers a speech at an event hosted by the school district in Appleton, Wisconsin must submit the speech in advance and then swear under oath they will not deviate from the script. And that includes students.

“The opportunity to speak at a school event is a privilege, not a right,” the Appleton Area School District wrote in a statement. “These guidelines do not restrict or regulate individual or regulate individual speech or expression. However, individual speech and expression may still be subject to other restrictions or limitations that are imposed by law or that the District may lawfully enforce through other policies, rules or practices.”

The new regulations were implemented after a Christian school board member invoked the name of Jesus Christ during a graduation ceremony last June.

Rev. Alvin Dupree told students to “never succumb to the pressure of being politically correct,” the Post Crescent reported. He also changed the district’s prepared statement of “best wishes” to “God bless.”

The new guidelines require all speakers, including students, to submit their entire speech in writing two weeks in advance of delivery.

First Liberty Institute, one of the nation’s leading religious liberty law firms, told Starnes Media they stand ready to assist any students who become targets of hostility because of their religious beliefs.

“Students who earn the right to address their peers are free to reference their faith as a part of those remarks,” First Liberty Institute attorney Jeremy Dys told Starnes Media. “Any school district that requires students to submit their speeches for pre-approval must be careful they do not force students to secularize their private remarks to satisfy government censors.”

Speakers are also not permitted to wear “jewelry, clothing or accessories that reasonably could be understood to communicate a message to the audience when the speech is given.”

Does that mean students will be banned from delivering a speech if they are wearing a cross necklace or a t-shirt that references the Almighty?

But the swearing of an oath is perhaps the most disturbing part of Appleton’s crackdown on free speech.

“Speakers that submit proposed speeches shall be required to certify that they will deliver the speech as written, except for minor and immaterial variances from the text of their proposal,” the district wrote. “Certification shall be in writing and shall be sworn under oath.”

I wonder if they are going to make folks swear that oath on a copy of the Holy Bible or a copy of Saul Alinsky’s “Rules for Radicals”?

The oath must be signed by student and adult speakers and must be witnessed and sealed by a Notary.

The oath states, among other things, “that I am affirming the statements to be true and correct under penalty of law.”

“The only oath these school officials should require of anyone is that they uphold the First Amendment to the US Constitution,” he told Starnes Media.

The Freedom From Religion Foundation, an organization that targets and bullies Christians, praised the school district’s crackdown on free speech.

“We think the district did the right thing,” FFRF attorney Ryan Jayne told the newspaper. “We expect there won’t be any problems with (Rev.) Dupree speaking at district events in the future, because under these guidelines we don’t expect that he’ll be allowed to speak.

And that’s exactly the point the school district is trying to make. Their new policies and procedures are meant to silence people of faith – specifically Christians.

As I wrote in my new book, “Culture Jihad: How to Stop the Left From Killing a Nation,” many of our public schools have been turned into indoctrination centers for leftwing propaganda. Every freedom-loving American should be appalled by the actions of the Appleton Area School District.

Heaven forbid the day comes when an American teenager or a pastor is dragged off the stage by security forces simply for uttering the name of Jesus Christ at a graduation ceremony.

Todd Starnes is president of Starnes Media Group and host of “Todd Starnes News & Commentary,” a daily radio commentary heard nationally on hundreds of radio stations. Click here to subscribe to his newsletter.