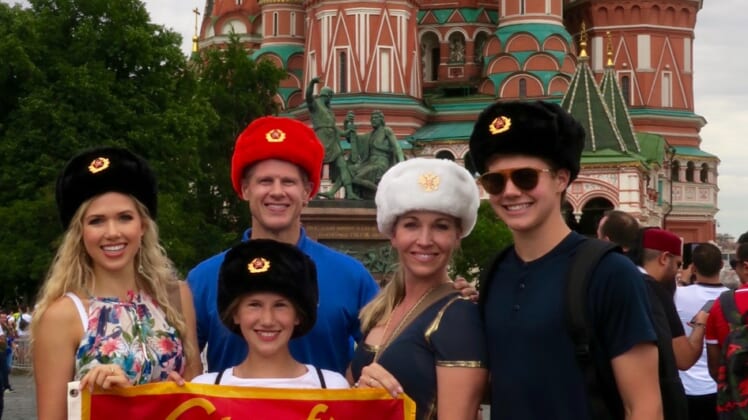 Tavia Hunt, of Dallas, Texas, wanted to add a personal touch to her family’s Christmas cards this year. So she decided to create a customized stamp for her cards.

But the stamp was rejected because it allegedly violated a United States Postal Service regulation that bans any depiction of religious content on customized postage. Click here to read the regulation.

Mrs. Hunt had ordered the stamps on Nov. 28 through Zazzle and Stamps.com, third-party vendors approved and licensed by the USPS to sell customized postage stamps.

On Dec. 3 she received a message from Zazzle explaining why her order had been canceled.

“The order was canceled due to the prominence of St. Basil’s cathedral on the background,” the message read. “Due to the new rules on religious images from the USPS, we could not pass the image as provided.”

A representative from Stamps.com sent the family a similar explanation.

“We are required to adhere to USPS guidelines,” the message read. “Per USPS, all religious content is forbidden no matter the intent or faith.”

Mrs. Hunt was stunned that her stamps were rejected.

“I was shocked that a family photo that includes a historic cathedral in the background is considered too religious by the Post Office,” Mrs. Hunt said.

No one should have to go to court to send a Christmas card,” General Counsel Hiram Sasser told Starnes Country.

First Liberty, which is representing Mrs. Hunt, is threatening to sue the USPS if they do not approve her postage stamps by noon on Friday.

“The regulation promotes unconstitutional viewpoint discrimination,” Sasser wrote in a letter to the postmaster general.

“The Hunt family are devoted Christians who desire to share their religious identity with others via customized postage stamps during the Christmas season,” Sasser wrote. “But as a result of the USPS regulation at issue, they are unable to do so purely because they depict the Hunt family posting in front of a historic cathedral and landmark.”

Ironically, St. Basil’s Cathedral was secularized and converted into a museum decades ago, Sasser noted.

And he rightly points out that the USPS currently sells and markets stamps that feature nativity scenes, menorahs and Diwali lamps.

“The USPS’s absolute ban on private religious symbols on postage is unreasonable in light of its practice of selling stamps acknowledging directly to the public,” Sasser wrote.

The USPS told me there are different regulations governing customized stamps and official U.S. stamps.

“These regulations exclude any depiction of religious content from images that are eligible for use with Customized Postage products,” a USPS spokesperson told me. “Official U.S. stamps and philatelic products issued by the Postal Service are not subject to these regulations.”

Let’s just hope First Liberty’s letter was not mailed to the Postmaster General with a customized religious stamp. Otherwise, it might be marked, “Return to Sender.”