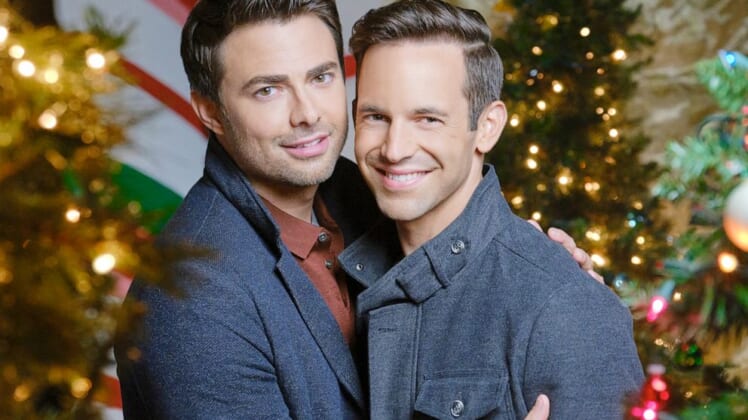 The Hallmark Channel is set to release its first homosexual-themed Christmas movie on Sunday, commonly known as the Lord’s Day. And one of the stars says he hopes young children will watch the program.

The actor told Good Morning America that he “hopes that the film will show young children, ‘that you are never too much and you are always enough.'”

The Hallmark Channel decided to abandon its winning formula of family-friendly programming after they were brutally attacked by radical LGBTQIA activists.

“I’m proud of everyone at Hallmark Channel for making the holiday table bigger and more welcoming and warmer this year,“ Bennett, best known for his role in “Mean Girls,” told NBC News. “It’s an honor to be part of the network’s progress.”

“The Christmas House” follows Brandon Mitchell (Bennett) and his husband, Jake (Brad Harder), who take a trip home for the holidays while anxiously waiting for a call about the adoption of their first child.

“What I love about the characters in the movie is that we aren’t caricatures or stereotypes,” Bennett gushed to NBC News. “We are two loving, stable, kind men who are in love and want to start a family of our own.”

During the scene, Bennett and Harder’s characters are involved in an argument outside of the house due to the stress of the adoption. “We have a little bit of a tiff because we’re going through the highs and the lows that a couple goes through when they’re adopting a baby,” Bennett explained. “And you see my husband comfort me and come together and we kiss.”

Good Morning America reports that “most of the cast and crew were in tears when the scene was finished, Bennett said. He explained that there was ‘so much anxiety and excitement’ on set because everyone knew they were ‘making history.'”

LGBTQ crew members even approached Bennett and Harder when the scene was finished, to comment on it.

Monica Cole, of One Million Moms, says she saw it coming.

“So many people feel betrayed by Hallmark, which used to be set apart from other channels because of the wholesome, family-friendly content it aired,” she said in a statement posted on the group’s website.

“The once conservative network has caved to LGBTQ pressure and has done a one-eighty from the wholesome content the channel once aired, and the network is now catering to the Left.” she said.

One Million Moms has called for a nationwide boycott of the Hallmark Channel. Click here to sign their petition.