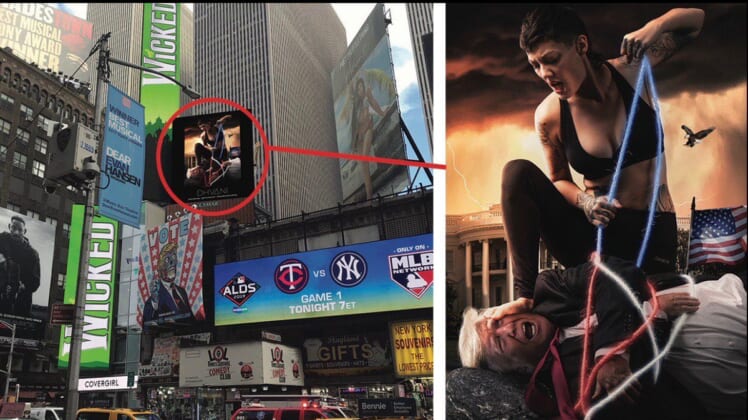 “There is nothing more American than Freedom of Choice & Freedom of Speech,” the athletic company DHVANI wrote on its Instagram page.

EDITOR’S NOTE: Sign up for a free subscription to Todd’s weekly newsletter: a must read for Conservatives and people of faith! Click here.

DHVANI said the image is called “Lady Liberty” and the model is a United States Marine Corps veteran.

Other photos in their campaign depict the president being bound and gagged by surly-looking feminist gals. (for the record, I did not ask the individuals in the photograph whether they identity as women. I’m basing my assumption on their ample biological parts.)

“Sick,” wrote Turning Point USA founder Charlie Kirk. “The president receives daily death threats, Secret Service had to arrest an armed man outside his rally. And this is what is plastered in Times Square – a literal depiction of violence against him.”

DHVANI said they stand agains the president and for women’s rights. Yeah, we sort of picked up on that thanks to the subtle advertising campaign.

“A woman’s right to bodily autonomy is the law of the land,” the athletic company declared.

Secret Service had to arrest an armed man outside his rally

Will Democrats condemn this company, @DhvaniWear?

RT so they can’t ignore pic.twitter.com/yHlirIannp

“The Trump administration has imposed a Title X gag rule that leaves people of color, people with low incomes, and those living in remote or rural areas with nowhere to go for reproductive healthcare,” DHVANI wrote. “This is a targeted blow to the over 4 million patients who obtain birth control, cancer screenings and other essential care through Title X. We simply cannot stand for this.”

They plan to donate cash from their sale of yoga pants and tank top to help fund abortions.

I’m also surprised by DHVANI’s insensitivity to the transgender community. Why did they select a biological woman for their ad campaign defending women’s rights? Their tone deafness on that issue is a bit disappointing for an athletic company that prides itself on being woke.

Click here to get an autographed copy of Todd’s new book, “Culture Jihad: How to Stop the Left From Killing a Nation.