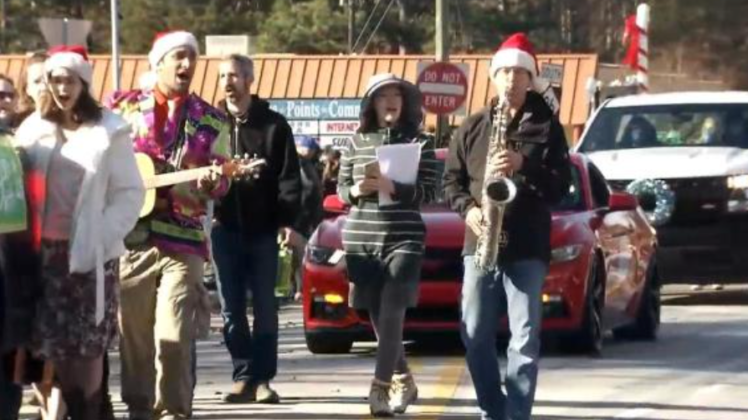 The good people of Youngsville, North Carolina said it would take more than a grinchy governor to stop their annual Christmas parade.

Governor Roy Cooper – a Democrat – has banned large gatherings across the state. And the local health department strongly urged citizens not to parade.

In response some 500 people collectively said, “Hold my egg nog.”

Just about the entire town hauled out the holly, decked the halls and had a grand old Christmas parade.

Television news reporters from Raleigh were beyond outraged – breathlessly reporting how people were not wearing face masks or social distancing.

One horrified journalist noted that people were singing Christmas carols – without race coverings.

“I’m taking the risk,” school teacher Lindsey Newton told the Raleigh News & Observer. “It’s tradition. If I could go to every person and say ‘Put your mask on,’ I’d probably get hit in the face. All I can say is the Good Lord’s in control.”

Mayor Fonzie Flowers dismissed concerns from Democrats and the reporters. He pointed out that if a few hundred people can gather inside Walmart or Lowes, then a few hundred folks can gather outside for a Christmas parade.

“Our parade is the exact opposite: outdoors, physically distanced, and masked,” Flowers told television station WECT. “To put it simply, if our state’s health guidelines allow over 2,000 people to be in a 4-acre Walmart at the same time, we believe it’s safe to have a fraction of that number along our outdoor parade route.”

Now there’s no denying most of these parade entrants are not wearing masks and almost all tossing candy to children. ⁦@newsobserver⁩ pic.twitter.com/7t4zSRpJPc

Youngsville stood alone in the Triangle area and much of the state, declining to cancel its parade against strong urgings from the Franklin County Health Department https://t.co/tVAnGVwCSx

A friend sent me this aerial photo of the crowd at the Youngsville Christmas Parade that was held against state and county orders. @WNCN pic.twitter.com/6d6eI6Uuua