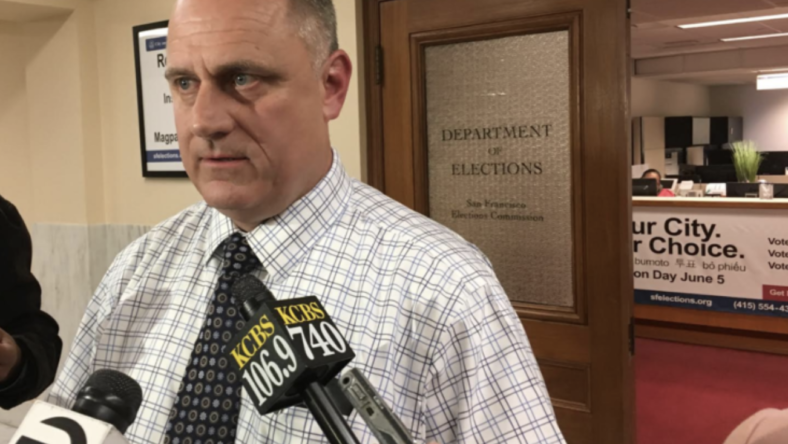 The only way to get uncensored conservative news is by subscribing to Todd’s FREE newsletter. Click here to sign up.

John Arntz has been in charge of elections in San Francisco for the past two decades. By all accounts, he’s done a good job. No major scandals. All the votes are actually counted on Election Day.

It’s all the more impressive because the Department of Elections has managed five elections in just over a year.

Flawless – is how one San Francisco newspaper described his job performance.

So it was a bit of shock to Mr. Arntz and the community-at-large when he learned his contract was not going to be renewed.

Mr. Arntz is getting fired because he’s a white man.

The city’s election commission says they want to give non-white candidates a shot at the job — part of their racial equity plan.

Elections Commissioner Cynthia Dai, who voted to not renew Arntz’s contract, confirmed to Mission Local that their decision not to renew the man’s contract had nothing to do with his stellar job performance.

“Our decision wasn’t about your performance, but after twenty years we wanted to take action on the City’s racial equity plan and give people an opportunity to compete for a leadership position,” read an email sent from commission president Chris Jerdonek to Arntz. “We also wanted to allow enough time for a fair and equitable process and conduct as broad a search as possible.”

Some city leaders were furious.

“I think some folks have forgotten the history of this department,” City Attorney David Chiu told Mission Local. “Before Director Arntz, we had five directors in as many years, ballot boxes floating in the bay and an intense lack of confidence in city elections. Many of us are mystified.”

Not even the folks at UC Berkeley are on board with such a radical policy.

“Certainly if they called a competent lawyer before doing this they would be in a better position,” UC Berkeley law professor Joan Williams told the newspaper. “Can you deny someone a job based on race? No you cannot. So I would say this was not handled in the best way possible.”

Hiring people for the color of their skin instead of their ability to do the job.

That’s not a dream. It’s a nightmare.

My latest book makes a fantastic stocking stuffer. “Our Daily Biscuit: Devotions With a Drawl.” It’s a collection of hilarious and inspirational stories. Click here to get a copy.