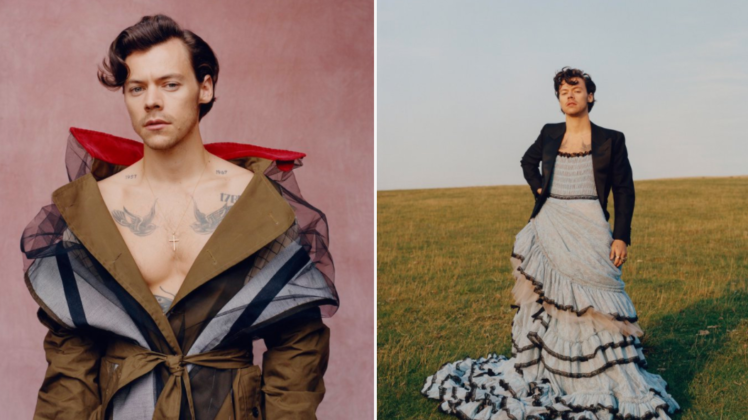 Harry Styles, the former boy band singer, is making national headlines in the fashion world. The first man to grace the cover of Vogue. He was also wearing a dress.

Mr. Styles says society should dismiss the idea that there are clothes for men and clothes for women. He went on to say that wearing ladies garments is “amazing.”

Vogue prides itself in being the industry leader when it comes to fashion and style – and if they have their say – hairy-legged men with burly chests will be painting the town red in Gucci gowns with matching handbags.

I wrote about this bizarre cultural quagmire in my book, “Culture Jihad: How to Stop the Left from Killing a Nation.”

It’s a direct assault on cultural norms – this idea of gender fluidity. The Left wants you to believe there’s no such thing as male or female. They want you to believe that you actually exist on some sort of spectrum.

They want to create a society where it’s perfectly acceptable for Doris and Sally to wear jock straps. The Left says it perfectly normal Cousin Leroy meanders through Walmart wearing ladies unmentionables.

I conducted an informal survey on my Facebook page asking women about the characteristics they look for in a man. They overwhelmingly said they wanted a man who could provide for their family and carry them out of a burning building.

By and large, most American women don’t want to be in a situation where their children ask, “Mommy, why is daddy wearing a dress?”

“There is no society that can survive without strong men,” she wrote on Twitter.

She also warned that it’s no coincidence that the attack on manhood is happening while the nation embraces Marxism.

“The East knows this. In the west, the steady feminization of our men at the same time that Marxism is being taught to our children is not a coincidence. It is an outright attack,” Owens said.

She makes a very good point. It’s a lot easier for an invading army to conquer a nation whose warriors are decked out in evening wear and high heels.

“Bring back manly men,” she declared.

There is no society that can survive without strong men. The East knows this. In the west, the steady feminization of our men at the same time that Marxism is being taught to our children is not a coincidence.
It is an outright attack.