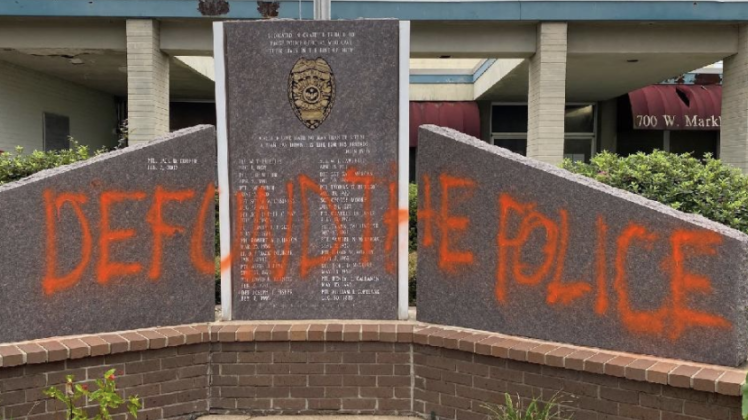 An untold number of vile thugs attacked a memorial to fallen police officers along with a number of government buildings in Little Rock, Arkansas.

“Defund the police,” was spray painted on the memorial along with other anti-police messages. At least one patrol care was set on fire. Tires were slashed on other vehicles. And police headquarters was defaced with graffiti.

“I can assure you that whoever’s responsible for this will be prosecuted to the fullest extent of the law,” police chief Keith Humphrey said, calling the vandalism “a cowardly act.”

“Twenty-three officers’ names are etched into this wall,” Humphrey he added. “These are men who gave their lives protecting the streets of this city, and the unfortunate thing is that we have people who do not respect that.”

Sen. Tom Cotton (R-AR) was among those who condemned the hateful attack.

“To the families of the police officers whose names are enshrined on this memorial: your loved ones gave their lives in the service of their fellow man and have forever earned the love and appreciation of Arkansans,” Cotton said in a statement. “No pathetic act of vandalism will ever change that fact. The criminals who defaced their memory — and their politically-motivated supporters — will be lost to history, but the names of our fallen officers will always be honored and remembered.”