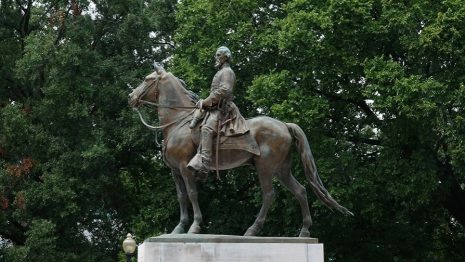 For the past several years progressives have been waging a culture jihad across the nation, turning our nation’s heritage into a pile of rubble. They’ve been bulldozing our history much like the Islamic Radicals have been doing in Iraq.

Sadly, my hometown of Memphis, Tennessee, has suffered a similar fate.

While most of the good citizens of Memphis were attending Wednesday night church services, the mayor and city council were busy finalizing a despicable plot to bypass the law and desecrate a Civil War grave site.

In October the Tennessee Historical Commission refused to allow city leaders to remove statues of Nathan Bedford Forrest and Jefferson Davis from two city parks. The city initiated mediation with the state, but that too, was unsuccessful.

Instead of following the ruling, the mayor and the city council concocted a nefarious plan to disobey the law and take down the statues in the dark of night.

Click here to read the full-rundown of what happened.

The city council voted on Wednesday afternoon to sell two public parks to a newly formed nonprofit group chaired by a county commissioner. (Anybody smell a rat?)

The two parks – both prized pieces of real estate – were sold for $1,000 each. What kind of a shady real estate deal is that?

“The law allows a private entity to remove items such as statues from its own land,” Mayor Jim Strickland told bewildered citizens.

After the city council passed the sham real estate deal, the cowardly mayor issued a notice on social media.

“Health Science Park and Memphis Park have been sold,” the mayor declared. “Operations on those sites tonight are being conducted by a private entity and are compliant with state law.”

Within a matter of hours both statues were removed – in the darkness of night.

“The City made a decision to willfully violate state law and remove the statues of Forrest and Davis,” said Thomas Strain of the Sons of Confederate Veterans. “This is a direct violation of state law and we must allow the state to pursue this case in a lawful manner.”

James Patterson, the commander of the Tennessee division of the Sons of Confederate Veterans, called it a “well-organized, behind the scenes plan by the city.”

“They are willfully violating the Heritage Preservation Act. The City has broken state law,” Patterson said.

Beyond that, the bodies of Nathan Bedford Forrest and his wife are buried in one of the parks. Therefore, it is my contention that the mayor and city council are also guilty of desecration.

Mayor Jim Strickland and the Memphis City Council flouted that law. They violated their oath of office and they desecrated a grave site.

I urge the governor and the state legislature to launch an immediate investigation of the corruption that has infested Memphis City Hall. The law demands it.

And I look forward to the day when Mayor Jim Strickland and members of the city council are removed from office and hauled out of City Hall in handcuffs.