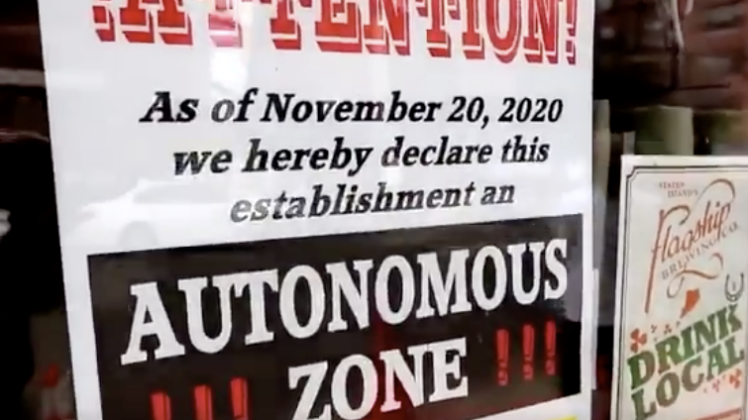 Give the owners of Mac’s Public House in New York City extra credit for creativity.

The popular Staten Island bar declared their watering hole an “autonomous zone” to get around government-imposed China Virus restrictions.

“!ATTENTION! We hereby declare this establishment an !!!AUTONOMOUS ZONE!!!,” reads a sign spray painted in orange in front of the bar.

The food and booze was on-the-house provided customers donated tips. Local authorities were told they were not welcome.

That’s because the New York City Sheriff’s Office had already stripped the bar of its liquor license and imposed a $1,000 per day fine because they refused to obey orders to shut down.

“It doesn’t seem like we can do business,” the owners said on a YouTube video. “So here’s what we’re going to do for everybody: We’re going to give away everything for free. So now you can come to Mac’s Public House, and you can eat for free and you can drink for free. We just ask that you do make a donation toward us so that we can still pay our bills.”

CYBER MONDAY: Order a signed copy of Todd’s latest book, “Culture Jihad: How to Stop the Left From Killing a Nation.”

“We refuse to abide by any rules and regulations put forth by the Mayor of NYC and the Governor of NY State,” reads a sign posted in the bar’s front window.

God bless these small business owners and great American patriots! Click here to leave these guys a message on their Facebook page.