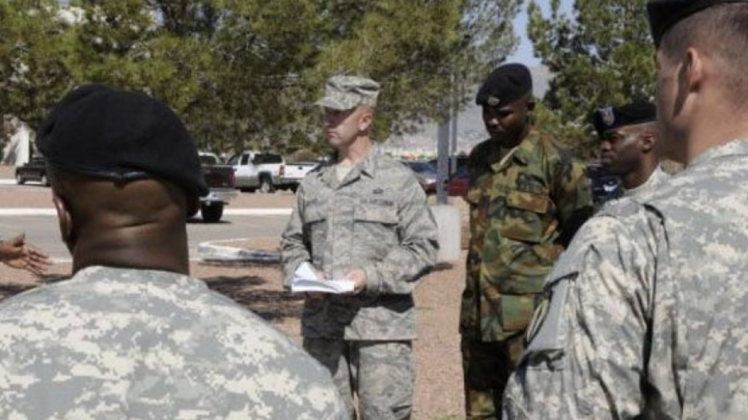 FROM THE ARCHIVES: In 2013, I received a controversial 600-plus page manual used by the military to train its Equal Opportunity officers teaches that “healthy, white, heterosexual, Christian” men hold an unfair advantage over other races, and warns in great detail about a so-called “White Male Club.”

The manual, which was obtained by the Todd Starnes Radio Show, also instructs troops to “support the leadership of people of color. Do this consistently, but not uncritically,” the manual states.

The Equal Opportunity Advisor Student Guide is the textbook used during a three month DEOMI course taught at Patrick Air Force Base in Florida. Individuals who attend the training lead Equal Opportunity briefings on military installations around the nation.

The 637-page manual covers a wide range of issues from racism and religious diversity to cultural awareness, extremism and white privilege.

I obtained a copy of the manual from an Equal Opportunity officer who was disturbed by the course content and furious over the DEOMI’s reliance on the Southern Poverty Law Center for information on “extremist” groups.

“I’m participating in teaching things that are not true,” the instructor told me. He asked not to be identified because he feared reprisals.

DEOMI instructors were also responsible for briefings at bases around the country that falsely labeled evangelical Christians, Catholics and a number of high-profile Christian ministries as domestic hate groups.

I contacted the Pentagon as well as the DEOMI multiple times for comment on this story, but so far they have not responded to my requests.

DEOMI opened in 1971 in response to the civil rights movement. It’s responsible for Equal Opportunity/Equal Employment Opportunity education and training for military active duty and reservists, according to its website.

The subject of white privilege emerged in a 20-page section titled, “Power and Privilege.”

“Whites are the empowered group,” the manual declares. “White males represent the haves as compared to the have-nots.”

The military document advises personnel to “assume racism is everywhere, every day” and “notice code words for race.” They are also instructed to “understand and learn from the history of whiteness and racism.”

“Assume racism is everywhere, everyday,” read a statement in a section titled, ‘How to be a strong ‘white ally.'”

“One of the privileges of being white is not having to see or deal with racism all the time,” the manual states. “We have to learn to see the effect that racism has.”

On page 181 of the manual, the military points out that status and wealth are typically passed from generation to generation and “represent classic examples of the unearned advantages of social privilege.”

“As such, the unfair economic advantages and disadvantages created long ago by institutions for whites, males, Christians, etc. still affect socioeconomic privilege today,” the manual states.

The guide also points out that whites are over-represented and blacks are underrepresented in positive news stories, that middle class blacks live in poorer neighborhoods than middle class whites and that even though there are more white criminals than any other race, the news coverage of black criminals is about equal to the news coverage of white criminals.

The military manual goes into great detail about a so-called “White Male Club.”

“In spite of slave insurrections, civil war, the 13th, 14th, and 15th amendments, the women’s suffrage movement leading to the 19th amendment, the civil rights movement, urban rebellions and the contemporary feminist movement, the club persists,” the document states.

DEOMI states that “full access to the resources of the club still escape the vision of equitable distribution.”

The military also implies that white Americans may be in denial about racism.

In a section titled, “Rationalizations for Retaining Privilege and Avoiding Responsibilities,” the military lays out excuses white people use.

“Today some white people may use the tactic of denial when they say, ‘It’s a level playing field; this is a land of equal opportunity,’” the manual reads. “Some white people may be counterattacking today by saying political correctness rules the universities or they want special status.”

DEOMI points out that if “white people are unable to maintain that the atrocities are all in the past, they may switch to tactics to make a current situation seem isolated.”

They said some of the ways whites may claim to be victims include saying things like, “I have it just as bad as anyone else,” “They’re taking away our jobs,” or “White people are under attack.”

The military concludes the section by urging students to “understand and learn from the history of whiteness and racism” and “support the leadership of people of color.”

I called former Congressman and Lt. Col. Allen West (ret.) to get his take on the manual. In a nutshell – he wants a congressional investigation.

“This is the Obama administration’s outreach of social justice into the United States military,” he told me. “Equal Opportunity in the Army that I grew up in did not have anything to do with white privilege.”

West said he is very concerned about the training guide.

“When the president talked about fundamentally transforming the United States of America, I believe he also had a dedicated agenda of going after the United States military,” he said. “The priorities of this administration are totally whacked.”

West said the DEOMI manual reminded him of a similar program inflicted on the military by President Clinton.

“They came down with a new training requirement called, ‘Consideration of Others Training,’” he said. “The soldiers were supposed to sit around and go through vignettes and talk about their feelings.”

I truly wish the Pentagon and the DEOMI would return my telephone calls. I’d like to know how teaching soldiers, airmen and sailors about white privilege and fomenting racial division helps them protect our nation from the enemy.