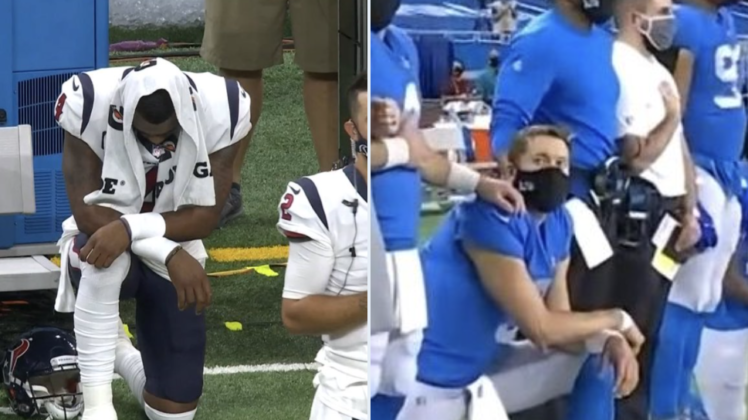 Matthew Stafford and Deshaun Watson were among the players on the Detroit Lions and Houston Texans who knelt during the national anthem before their Thanksgiving Day matchup Thursday.

President Trump expressed his disgust with the unpatriotic players on Twitter.

“No thanks,” he tweeted.

Stafford explained why he decided to disgrace himself and his family during an interview last September.

Stafford also pledged $1.5 million to help promote diversity, inclusion, equity and social justice at the University of Georgia, his alma mater, with $350,000 of that heading to a new social justice program for the athletic department.

Many teams are not even broadcasting the National Anthem over fears it might lead fans to completely abandon the once-beloved American tradition.

The Associated Press reports that NFL games are averaging 15.1 million television and digital viewers, according to the league and Nielsen, a 6% decline from last year.

Matthew Stafford took a knee in order to protest police brutality during the National Anthem at the start of the game. One of the more notable white QBs in the NFL.

Trump Supporters Who Won’t Wear a Mask Because of “FREEDOM’ are Upset Matthew Stafford Took a Knee Against Racism During Anthem (Tweets-Vids) https://t.co/41472KzsvS pic.twitter.com/Ggg90Dl5iE

Detroit Lions Quarterback Matthew Stafford took a knee during the National Anthem of the Thanksgiving Day game this afternoon. pic.twitter.com/3swAFVpl29