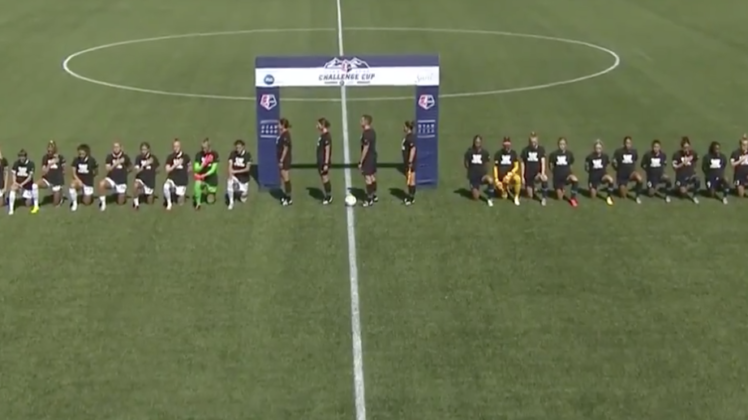 The National Women’s Soccer League attacked a Fox Sports analyst after he praised the courage of players who still stand for the national anthem.

I write about this sort of un-American thuggery in my new book, “Culture Jihad: How to Stop the Left from Killing a Nation.” Click here to get a copy.

“Now it takes courage to actually stand for the national anthem,” wrote Alexi Lalas in a now-deleted Twitter message.

He wrote the post in response to dozens of female soccer players who wore Black Lives Matter shirts and took a knee during the Star-Spangled Banner.

“If this is your takeaway from the organized action by our players, you clearly haven’t been listening, Alexi,” he NWSL wrote on its official Twitter page.

Instead of standing his ground, Lalas apologized calling it a unified and peaceful protest.

“I wholeheartedly support the NWSL and its players bringing attention to the problems of police brutality and systemic racism that exist,” he wrote. “I regret that my earlier tweet distracted from the historic and powerful actions on the field.

So Lalas was either intimidated by the militancy of Black Lives Matter or he was ordered by Fox to retract his statements.

“I’m sorry for any hurt or anger it caused,” he said.

Yes, folks. We live in a nation where standing up for the national anthem and honoring our troops is considered hurtful.

I wrote a few more words about today… pic.twitter.com/1jDGXEEK33