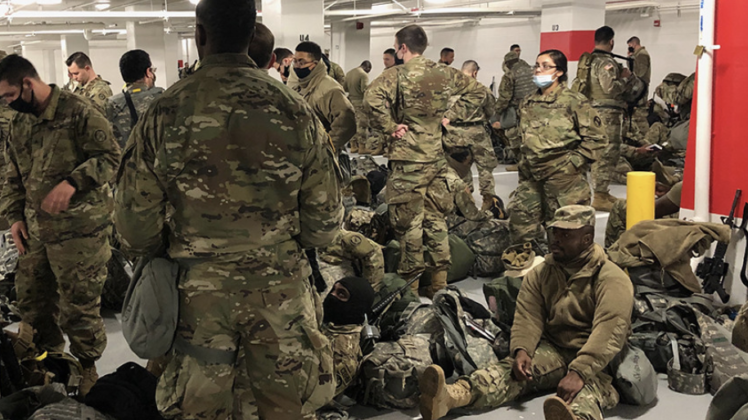 Politico reports that thousands of National Guardsmen were forced to vacate congressional grounds on Thursday and are now taking their rest breaks outside and in nearby parking garages.

“Yesterday dozens of senators and congressmen walked down our lines taking photos, shaking our hands and thanking us for our service. Within 24 hours, they had no further use for us and banished us to the corner of a parking garage. We feel incredibly betrayed,” the Guardsman said.

The news outraged members of Congress who demanded to know the person responsible for evicting the troops.

“I happily volunteer my DC office for the National Guard to bunk,” he said. “It‘s not big, but we’ve got Southern hospitality. The Guard deserves better accommodations & sanitary/safe conditions. Not to mention phone chargers to call family!”

Republican lawmakers also suggested that the troops had been used by Democrats for a photo-op and then discarded.

Politico obtained photos showing the Guard members packed together in the parking garage, sleeping on the ground.

“Speaker Pelosi and Majority Leader Schumer—why are American troops who are tasked with keeping security at the Capitol being forced to sleep in a parking lot? They deserve to be treated with respect, and we deserve answers.” House Minority Leader Kevin McCarthy wrote on Twitter.

“As Congress is in session and increased foot traffic and business is being conducted, Capitol Police asked the troops to move their rest area,” Murphy said. “They were temporarily relocated to the Thurgood Marshall Judicial Center garage with heat and restroom facilities. We remain an agile and flexible force to provide for the safety and security of the Capitol and its surrounding areas.”

President Joe Biden has been in office barely 48 hours and he’s already demonstrated how little regard he has for our troops.

They should’ve kept the National Guard and evicted Congress.

I happily volunteer my DC office for the National Guard to bunk.

It‘s not big, but we’ve got Southern hospitality.

This is absolutely unacceptable and despicable treatment of our brave and dedicated National Guard who answered the call to serve.

We need to demand answers now and this needs to be fixed immediately. https://t.co/FyNUpFYJyX

Two nights ago, my wife and I prepared chili for over 100 National Guard and Capitol Police. Tonight our troops have been relegated to the gutter of The People’s House… I am sickened. https://t.co/xuLEgD7jOi

We should be grateful to the members of the National Guard who are here securing the Capitol. I don’t know who ordered them to go sleep in a garage and can’t understand why they would do that.

It needs to be reversed.

Speaker Pelosi and Majority Leader Schumer—why are American troops who are tasked with keeping security at the Capitol being forced to sleep in a parking lot?

They deserve to be treated with respect, and we deserve answers. pic.twitter.com/J0R2dRC8bM