‘ABSURD’: Southwest Passenger Says He Was Kicked Off Flight for Eating Without Mask On 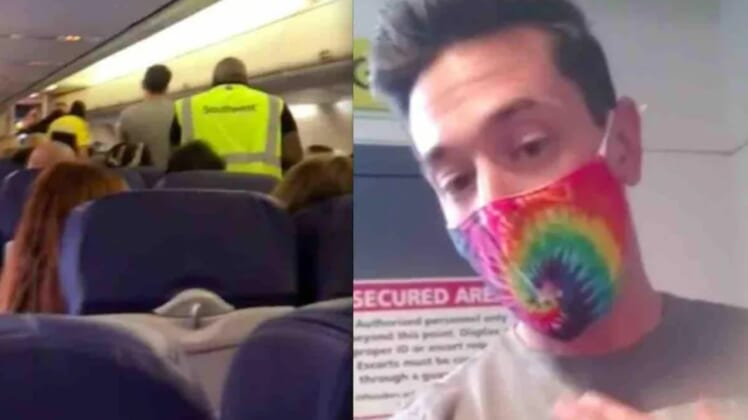 A Maryland Southwest frequent flyer was kicked off a flight for not wearing his mask in between bites.

Avi Mandel took off his mask to snack on some Twizzlers before his Fort Lauderdale-bound flight from Baltimore. He recorded a video on his cell phone, saying he “got kicked off a plane because I wasn’t wearing my mask in between my bites while I was eating.”

When a flight attendant told Mandel to mask up, he thought she didn’t know he was eating, Mandal told WBZ-TV. Then he heard “Everyone who’s eating has to wear mask in between bites” over the loudspeaker.

However, the plane returned to the gate and a security team escorted Mandel off.

Mandel told WBZ-TV “there was no warning of it, there was no explanation, there was nothing. It was just a matter of, like, ‘I don’t like you; get off the plane.'”

Video shows other passengers sticking up for Mandel, who is seen wearing a tie-dye mask: “That is so wrong. He did nothing wrong…He was eating. Oh my God.”

Mandel said he was rebooked on a flight but will not be flying Southwest anytime soon.

“It was absurd,” he told the station. “The way I was treated was absolutely absurd. It was crazy, and it wasn’t fair.”

He told WBZ he later found out a new federal mask mandate went into effect in February requiring passengers to wear face masks at all times — including “in between bites,” which he said he would have done if the crew told him.

“I think it could be handled a lot better, and I think the rule could have been placed better,” he told the station. “I always do follow the rules. I’m on their plane, I get it. But this was not a rule I knew of, and it wasn’t explained to me. I didn’t see it anywhere at that point, so to me, it wasn’t a rule that I was breaking. Had I known, I obviously would have done it differently, but you got to tell someone the rule in order for them to follow it.”

A Southwest spokesperson told WBZ the airline regrets any inconvenience to Mandel but noted “the face covering policy is communicated throughout the booking and check-in process, and it’s the responsibility of their crew to enforce federal regulations.”